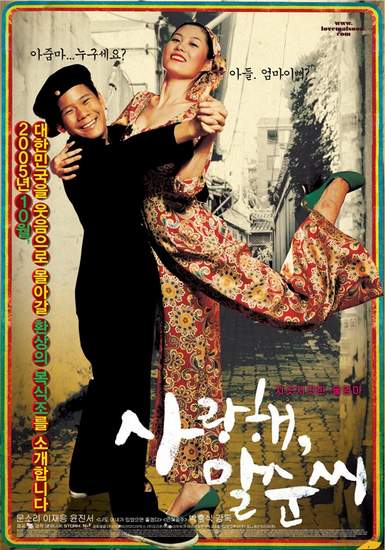 Alternative title "Bravo, My Life" 1980, the sad yest warm and humorous story of a middle school student who believes that he lost his mother beacuse of 'a chain letter' set in a dramatic and tumultuous era. Becoming more and more sexually aware, Gwang-ho no longer likes the scent of his mother who wears heavy make-up as she sells cosmetics door-to-door.

On 27th when special newspaper editions announcing the news of the president's death were strewn all over the streets, Gwang-ho started another peaceful morning as usual. One night, Eun-sook, an assistant nurse who is the complete opposite of everything Gwang-ho's mom is, rents a room at Gwang-ho's house and becomes the object of all of Gwang-ho's attention and affection. Disliking his mother's job intensely, Gwang-ho becomes closer with Eun-Sook and starts denying the very existence of his mother, considering her a burden. Gwang-ho receives a lucky letter and starts making a list of people to send it to.

"President Lincoln was assassinated because he didn't pass on a lucky letter. Then maybe that's why President PARK got killed too." The picture of the president in Gwang-ho's classroom has been replaced again and people around him start leaving one by one. Gwang-ho is wrapped up in guilt since he thinks that the lucky letter he sent out is the cause of the all the bad luck. It is only when Gwang-ho moves up a grade and faces hope that doesn't seem like hope that he finally remembers the faces of people he misses.