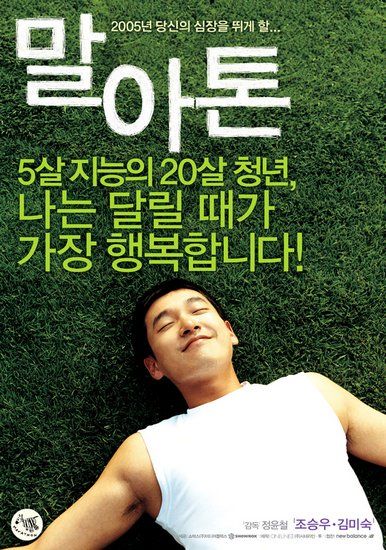 Marathon (Hangul, Maraton) (2005) is a South Korean movie based on the true story of Bae Hyeong-jin, an autistic runner. The film popularized the South Korean term for autism (Hangul: japyejeung) which can be translated as "self-closed syndrome."

The movie follows the story of an autistic young man, Cho-Won, who finds release only in running. As a child, Cho-Won regularly threw tantrums, bit himself, and refused to communicate with others finding solace only in zebras and the Korean snack, Chocopie. His mother never gave up on him and was determined to prove to the world that her child can be normal. As Cho-Won gets older, he begins to find a passion for running and his mother is there to encourage and support him. Even though both Mother and Cho-Won suffer from family and financial issues, they find a former marathon champion, now a lethargic old man with alcohol problems.

The old man, who is serving community service hours as a physical education teacher for a DUI, grudgingly accepts the offer to train Cho-Won in marathon running, but eventually becomes lazy with him. The teacher often takes Cho-Won's snack, and takes Cho-Won to a Steam House to relax. Even though the old marathoner slacks off most of the time, Cho-Won's determination for running is firm (he accidentally runs 100 laps around a soccer field when the teacher told him to without literally meaning it).

He takes third place in a 10km running race, which causes his mother to set another goal for her son: to run a full marathon under four hours. This is not an easy task, however, as Cho-Won wants to win but doesn't know how to pace himself. Therefore, his mother finds a former marathon runner, who must perform 200 hours of community service for a DUI, as Cho-Won's coach. The movie shows the emotional struggles of a Mother who is not sure if she is forcing her son to run or if it truly is his passion. The movie further explores and shows the deep love and genuine purity through Cho-Won.