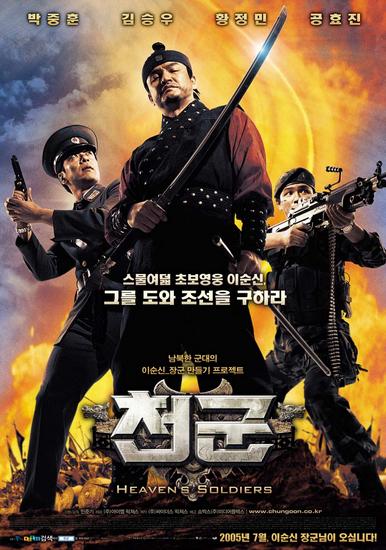 Heaven's Soldiers is a 2005 film from South Korea, directed by Min Joon Gi. It is an action and humorous movie shifting back and forth between high tension and comedy, and combining elements of many genres such as war films, time travel and historical drama.

The film begins with high-level military leaders from both sides discussing the surrender of a North Korean 50 MT nuclear warhead in a secret underground development bunker near the DMZ. The warhead was secretly jointly-designed, but international pressure has forced North (and South) Korea to hand over the device and close the facility. North Korean officer Major Kang, displeased with the conciliation of the Koreas, rebels and steals the warhead along with several of his loyal soldiers, even killing some North Korean guards in the process. Due to the top-secret nature of the meeting, the leaders of both sides cannot request reinforcements to apprehend the officer, and instead dispatch a South Korean special forces platoon that was present at the meeting.

The platoon intercepts the rebellious Kang and his squad by boat and begin a firefight in the dead of night. However, in the middle of the conflict a comet travels dangerously close to Earth - and this causes a "time rift" linking the present with other points in the comet's 433-year cycle of close approaches to the Earth. Three modern Korean men from each side (and one woman scientist, Dr. Kim, kidnapped along with the warhead) unintentionally and to their surprise find themselves time traveling back from 2005 to 1572. The soldiers wind up in the middle of a skirmish between Joseon-era Koreans and Jurchen invaders. After some confusion, a grenade blast routs the Jurchens, and the soldiers immediately wind up with the nickname Heavenly Soldiers.