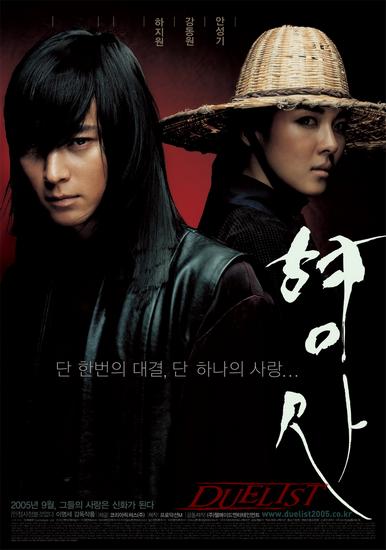 Duelist (Hyeongsa) is a 2005 South Korean film, directed by Lee Myung-se. The Korean title translates as 'The Detective'.

The movie opens with a fish tale narrated by a low-class metalsmith in a tavern in Joseon-era south-western Korea, . The scene then cuts to a street circus, in which an elegant masked swordmaster (Kang Dong-won) fascinates his market-place audience. Undercover detective Ahn (Ahn Sung-ki), and his protégé Namsoon (Ha Ji-won) are tracking down suspected money-counterfeiter gang, when the masked swordmaster ends his show by killing a government official who carries the kingdom's currency metal cast.

The swordmaster escapes when a cart crashes and disgorges a mountain of counterfeit coins, causing public commotion. The distraction is a success, but Namsoon chased and dueled with the escaping swordmaster/duelist, proving herself a master of martial arts specializing in a pair of long-knives. She succeeded in cutting a quarter of his mask and glanced at his revealed eye before he escaped. She and her team are left with bodies of the counterfeit gang, seemingly massacred in an instant by an unknown duelist.

It is then revealed that counterfeit coins are spreading wildly among the populace, causing hyperinflation that threatenes the monarchy. The police forces are determined to find and arrest the counterfeiters, believed to include an insider in the government. From a secret connection, the detectives obtain a picture of the duelist, noted for his "Sad Eyes", which Namsoon recognizes from her previous encounter. Their suspicion points to Song, the powerful defense minister. This suspicion is confirmed when Namsoon spots the duelist entering Song's manor. Namsoon and Ahn failed to chase the duelist. However, as Namsoon is walking alone in the night, Sad Eyes appeared from the shadows, asking if she is following him "because you like me?" Namsoon attacks, entering a duel that starts to become affectionate. Eventually, he vanishes after making a small cut on her clothing, revealing her cleavage. The resolute Namsoon persuaded her team to infiltrate minister Song's palace.

This plan is implemented, resulting with only Namsoon succeeding in her thinly-disguised appearance as a lady of pleasure. Coincidentally, she ends up having to serve the duelist in private, which she handles very tactlessly. Song called the duelist, interrupting Namsoon's session with him. Song turns out to be a superb swordsman, the only person who can outperform the duelist. Their conversation reveals that Song plans to overthrow the reigning young king and replace him with his future son-in-law, and that the duelist has been involved in this plan since childhood. Song reminds Sad Eyes that the duelist can kill him anytime he distrusts him, hinting that the duelist might be the planned royal successor. Song says that he always loved the duelist like a son.

After assaulting Sad Eyes in public, Namsoon is dismissed from the case by her director, only to be secretly assigned to find the final evidence to prove Song's involvement. Overhearing Namsoon's objectives, the duelist gave the needed evidence in a secret meeting with her, thereby sacrificing his destiny. Namsoon realizes her feelings for Sad Eyes. The father-figure Ahn recognizes this, advising her to forgo her feelings since he is a criminal while she is a police.

The movie draws towards a climax as scores of armed police surround Song's manor and attack the duelist and Song, as well as the other corrupt officials. In their last conversation, the minister tried to speak the nameless duelist's true name, but the police separate them and detective Ahn kills the minister. After the battle, Namsoon anxiously searches for the duelist's fate, only to be told by Ahn that "he is dead". Devastated, she returns to the lanes where she had encountered the duelist, haunted by his images. While she is walking back, the duelist appears once more in front of her. Namsoon feels that finally she can express her feelings, and in a denouement the couple dances in a picturesque combat under the moonlight. They were fighting "like they were making love", but then "disappeared suddenly", as narrated by the metalsmith in the tavern from the first scene. The final scene shows Namsoon and Sad Eyes spotting each other from a distance in the marketplace.