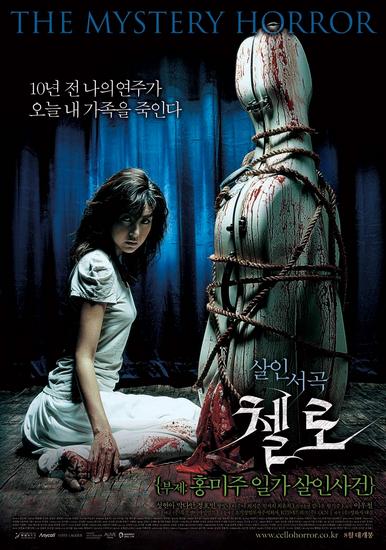 Cello is a 2005 South Korean horror film. The viewer first sees a young woman playing the Ave Maria on a cello, the scene shifts to show another woman bleeding on an operating table. Another scene shift shows the main character, Hong Mi-ju (Seong Hyeon-ah) watching students playing their cellos while their professor grades them. The professor, being friendly with Mi-ju, tried to coax her into going to a welcome home concert for the little sister of Kim Tae-yeon (Tae-yeon, as we find out, is deceased). Mi-ju appears nervous and politely declines both the concert and a job offer to become more than just an associate teacher. In the teacher's lounge, Mi-ju is confronted by an angry student who tells Mi-ju that all because of Mi-ju, all of her work for music is for nothing. The student is smug and cocky, promising revenge and asks Mi-ju "Are you happy now? You should be!". Mi-ju leaves, shaken, and starts to drive home. On her way back home, she nearly avoids getting into an accident with a truck, and discovers she has luckily avoided death. When she gets home, Mi-ju receives a message on her cell phone: "Are you happy? ...You should be."

Startled, Mi-ju looks around the house while turning on lights, but they snap off when she reaches the attic. There, she sees her elder, autistic daughter, Yoon-jin (Choi Ji-eun), sitting in a chair, facing the window. The lights come on, revealing her husband Jun-ki (Jeong Ho-bin), her sister-in-law Kyeong-ran (Wang Bit-na), and her younger daughter Yoon-hye. Everyone but Yoon-jin, who appears mute and emotionless, sings "Happy Birthday" to Mi-ju. Mi-ju opens her presents, which include a music album from Kyeong-ran, "Rainy Day". Yoon-hye shows her mother how she has taught her older sister to count to five with her fingers, which seems to fascinate Yoon-jin. Later on, as they bathe, Mi-ju tells Yoon-jin how happy she is, how much she loves Yoon-jin. Mi-ju seems to share a special affection for Yoon-jin, as she blames herself for Yoon-jin's autistic condition.

The next day after a doctor's visit, they pass a music store. Yoon-jin stops to stare at a cello, and Mi-ju buys it for her. When they get home, their dog, Sunny, barks uncontrollably at them, but stops once Yoon-jin and the cello pass by. Mi-ju meets the new, silent housekeeper, Ji-sook, and begins to teach Yoon-jin how to play the cello. The next morning, however, Sunny the dog is found dead.

More strange things happen; Yoon-hye plays in Kyeong-ran's room until the latter's fiance, Hyeon-woo, calls. Having been shooed out, Yoon-hye goes to her sister's room to ask to try the cello, but the normally calm and emotionless Yoon-jin surprisingly bites her little sister.