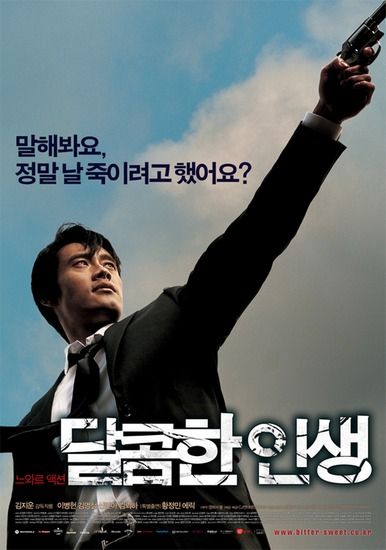 A Bittersweet Life (Dalkomhan insaeng) (Hangul:) is a 2005 South Korean film by Kim Ji-woon. Highly cultural and ruthlessly violent, it illustrates the ethical codes in the Korean mob and how they clash with personal morality.

Kim Sun-woo is an enforcer and manager for a hotel owned by a cold, calculating crime boss, Kang, to whom he is unquestionably loyal. The two share concerns over business tensions with Baek Jr., a son from a rival family, which is when Kang assigns Sun-Woo what is perceived (at first) to be a simple errand while he is away on a business trip - to shadow his young mistress, Heesoo, for fear that she may be cheating on him with another, much younger man, with the mandate that he must kill them both if he discovers their affair. As he performs his duty - following Heesoo, and escorting her to a music recital one day- he becomes quietly enthralled by the girl's beauty and innocence, as glimpses into his lonely, empty personal life become more prevalent.

When he does come to discover Heesoo's secret lover directly in her home, he fiercely beats him, but seeing the girl's traumatized state causes him to take pause, pulled by his attraction to her. He thus spares the two on the condition that they no longer see each other again, causing her to harbour enmity towards him, despite the fact he had saved their lives at the risk of his own.