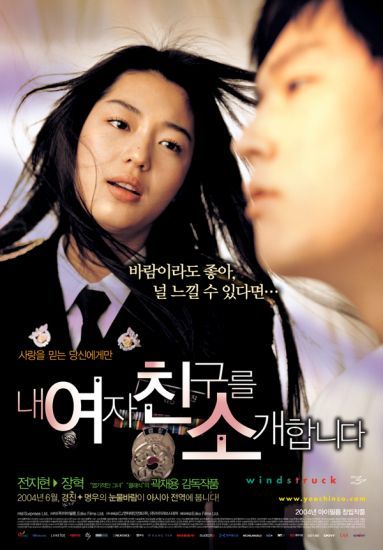 Windstruck (Nae yeojachingureul sogae hamnida, literally "Let me introduce you to my girlfriend") is a 2004 South Korean fantasy-romantic comedy directed by Kwak Jae-yong. The film was a major success, ranking as the 8th-highest grossing Korean film of 2004

The film stars Jun Ji-hyun as Officer Kyung-jin Yeo, an ambitious young female police officer serving on the Seoul police department. One day while chasing a purse snatcher, she accidentally captures Myung-woo Go (played by Jang Hyuk), a physics teacher at an all-girls school, who was actually trying to catch the thief. Later, Myung-woo discovers the stolen purse, but just as he picks it up, Kyung-jin spots him and tries to arrest him again. Kyung-jin is then given the job of escorting Myung-woo through a dangerous district, only to be distracted when she tries to break up a meeting between Russian Mafia and Korean gangsters. With Myung-woo handcuffed to her, Kyung-jin almost single-handedly brings down the two rival gangs (although she is helped when she accidentally causes the groups to start shooting at each other).

The first half of the film, told from Myung-woo's point of view, details the couple's growing attraction and love for each other, which climaxes with a trip to the countryside where Myung-woo tells Kyung-jin that if he were ever to die, he wanted to come back to earth as the wind. Soon after, he is almost killed in a freak automobile accident, but Kyung-jin saves his life. The film takes a turn into the fantasy genre in its second half after Myung-woo is accidentally shot and killed by another officer (although the situation is such that Kyung-jin thinks that it was her shot that killed him) as Kyung-jin chases after a criminal. Kyung-jin falls into a suicidal depression over his death and attempts to kill herself several times, almost succeeding when she throws herself off a building, only to be saved when a giant balloon floats under her. Soon after, she experiences visitations from Myung-woo, who appears as the wind, sending her messages and, at one point, he even appears in her dreams in order to give her the will to live after she is nearly shot to death by a criminal.

Ultimately the film follows a similar path set out by the American film Ghost with Myung-woo and Kyung-jin communicating and sharing one final gesture of love before he moves on to the afterlife. Myung-woo said that he will whisper, when she hears him whisper in the wind, she will meet someone with a soul like him. Myung-woo told Kyung-jin that he will always be beside her inside a book with a photo left by Myung-woo in the restaurant before he rushed to meet Kyung-jin who was chasing the insane criminal. In the first half of the film, Myung-woo told that his only memory of high school was his high school trip. The book and the photo is found and returned to Kyung-jin in the police station. The photo showed that on Myung-woo's trip, Kyung-jin was nearby. This proved Myung-woo's "I'm always beside you" was true to Kyung-jin. Kyung-jin rushed out to locate the finder of the book, ultimately ending up in the train station, where she is saved by Cha Tae-Hyun's character (credited as The Guy). Myung-woo whispered that The Guy is the one with the soul like him. Kyung-jin whispers that "he is always beside her."