Too Beautiful To Lie 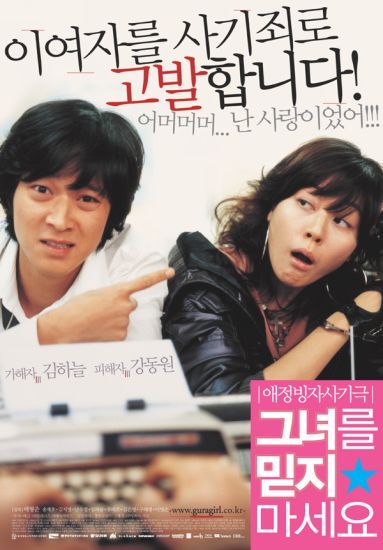 Too Beautiful to Lie (AKA Don't Believe in Her) is a 2004 South Korean film. A romantic, melodrama comedy about a beautiful ex-con convict and a innocent, naive village boy.

"Yeong-ju" is a cute, innocent looking girl with an excellent deception skills who is imprisoned for ex-convict fraud. But using her talent she managed to go through the evaluation and able to receive a parole for her only sister's wedding. She boards a train with wooden crafted geese which she handcrafted as for her sister's wedding gift. But during the journey she is confronted by an innocent village boy "Hui-cheol". He is also on his way to propose his love to his girlfriend with his deceased mother's family heirloom ring. Everything began messy when Yeong-ju witnessing pickpocket man stealing the ring from Hui-cheol. Driven mad by her own safety she stole the ring back, to make everything back to normal. But unfortunately for her, she is unable to board the train on time thus missing it and leaving her wedding gift bag on the train.

Determined to find her bag, she tracks down Hui-cheol and reaches his village looking for him. Making things more complicated everybody misunderstood her and welcomed her as their daughter-in-law due to the ring. Unwilling to tell them the truth due to her own safety and get time to resumption of her bag she manages to fool everyone around the family and manipulate Hui-cheol as father of her unborn child. Meanwhile, Hui-cheol who didn't have the ring to make the marriage proposal comes back empty with a heavy heart, and is enraged when he finds the plot that has been going on while he was away. But worsening his situation, no one actually believes him, thinking he had abandoned his poor fiancee, and ended up kicked him out of the house making his life more miserable.