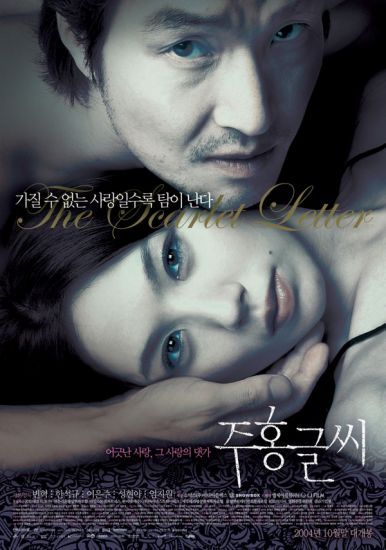 The Scarlet Letter is a 2004 South Korean film about a police detective who investigates a murder case while struggling to hang onto his relationships with his wife and mistress. The film debuted as the closing film of the Pusan International Film Festival in 2004. It's the second film by La Femis-graduate and academic Byun Hyuk (Daniel Byun), and starred Han Suk-kyu, Lee Eun-ju, Sung Hyun-ah and Uhm Ji-won.

Despite Lee Eun-ju's prior experience with depicting sex and nudity in Virgin Stripped Bare by Her Bachelors (2000), she came under the scrutiny of Korean press and netizens, for the (highly emotional) sex scenes and the notorious "trunk scene" in The Scarlet Letter. It is speculated her demanding role and its public scrutiny, had compounded and overlapped with an existing variety of family, financial, and career issues. Her severe depression ended in suicide in February, 2005, and the tragic conclusion has since become the central focus in popular perception and interpretation of the film, this particular one being her last.