The Guy was Cool 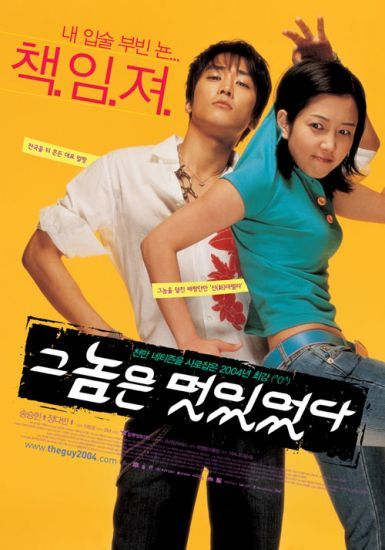 He Was Cool (Geunomeun meoshiteotda, also known as The Cool Guy) is a South Korean film. The film is based on a novel written by Guiyeoni. The story is about a cheerful high school student named Han Ye-Won (Jung Da Bin). She is a sweet, clumsy and warm girl. On the other side, there is Ji Eun-Sung (Song Seung Hun), a student from vocational school and well-known as a bully. He is hot-tempered and rude but deep inside he is longing to be loved.

One day, clumsily, Ye-Won leaves a message on the school website to reply to Eun-Sung's impolite message. She is shocked when someone calls her mobile and threatens her. Gradually, her best friend, Lee Kyung-Won, tells her who Eun-Sung is. He sends Ye-Won a message on her mobile: He will wait for her in front of the main gate. She is so scared that she and Kyung-Won decide to jump over the school wall. Unfortunately, the moment Ye-Won jumps, Eun-Sung is standing exactly at the other side of wall. She falls on him and their lips meet accidentally. Raising his voice, Eun-Sung asks her to take responsibility; she is astonished. His friend explains that Eun-Sung has never even held hands with a girl. Since she is the first girl who kissed him, as a consequence, she must marry him.

The story continues very fast. At the beginning, Ye-won does not have any feelings for Eun-Sung. She even rejects his invitation to come to his birthday party. Unknowingly, Eun-Sung has fallen in love with her; but he is not the kind of guy who knows how to express his inner feelings. He is jealous when Ye-Won is approached by other guys but he does not know how to be with someone he loves.

Although he is rude and bad-tempered, Eun-Sung always pardons Ye-Won's faults and clumsiness. One thing he couldn't bear was when he found out that Ye-Won went out with Kim Han-Sung, his senior and the one he hates a lot. The broken-hearted Eun-Sung decides to leave Korea following his mother to the USA.

A year later Ye-Won is seen with Kim Han-Sung, discussing her if she is scared for her SATs. It seems to be that they are in a relationship at this point. During her SAT, the hearing portion of the exam brings up a quote from Romeo and Juliet bring Ye-Won back to the memory of her and Eun-Sung in the park in front of the telephone booth where, no matter what, they would re-unite at the first snowfall. At this point Ye-Won stops what she is doing and runs to the park. She waits there as the scene rolls back to the fantasy she had a year ago and she starts to cry as Eun-Sung is not there. As she turns around, a rabbit is hopping towards her, the same rabbit she gave to Eun-Sung. She looks up and Eun-Sung is there. She yells at him saying "Why did you leave without saying goodbye?" And Eun-Sung replied "True love requires no words."

The film ends with Eun Sung's childhood memory of some opening event of an elementary school where the only kid that would kiss Eun-Sung was Ye-Won. An interesting aspect to this is that earlier on in the film, Ye-won uses Eun-Sung's cellphone to make a mini-video of her bedroom. There she captures footage of an old photo from when she was little, showing her and a friend. It turns out that this friend is actually the little Eun-Sung, hinting at the connection between the two. When Eun-Sung watches the video on his cell towards the end of the film, he is surprised to see himself and remembers that Ye-Won was THAT little girl.