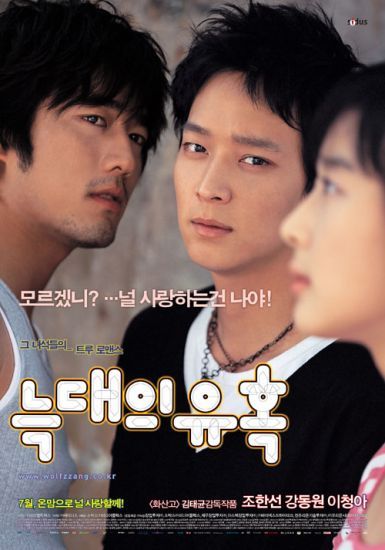 Romance of Their Own (aka Temptation of Wolves or True Romance) is a 2004 South Korean film directed by Kim Tae-gyun, and based on a novel of the same name by Internet author Guiyeoni. Starring Jo Han-sun, Kang Dong-won and Lee Cheong-ah, the film is about an average high school girl who moves from the countryside to Seoul after her father's death.

From her appearance to her mannerisms, it is easy to tell that Jung Han-kyeong (Lee Cheong-ah) is a country girl. After her father's death, she comes to Seoul to live with her mother (Kim Bo-yeon), planning to attend Kang-Shin High School. However, her life in Seoul is a series of mental and physical shocks. For example, on the bus, a slipper is thrown randomly at her head--but her problems don't end there. The guy who threw the slipper is none other than Ban Hae-won (Jo Han-sun), "the" guy at her school, and everywhere he steps, girls trail behind. Seeing Han-kyeong's pitiable and adorable nature, Hae-Won falls for her

The leader of Sung-Kwon High, Kang-Shin's neighbor and rival, is named Jung Tae-sung (Kang Dong-won), and he, too, has feelings for Han-kyeong. Despite his shy, adorable face, Tae-sung has strong fists and endless obstinacy. A fight that handles both pride and love begins between the two, and neither of them is prepared to back down. But Tae-sung has a secret, one that forces him to love Han-kyeong in spite of himself, and Han-kyeong, ignorant of this, tries to do her best to be gentle with both of them. Eventually, Tae-sung leaves Han-kyeong's side, and later, Han-kyeong and Hae-won learn of his secret. The heartbreaking brightness of this story makes even adults cry.