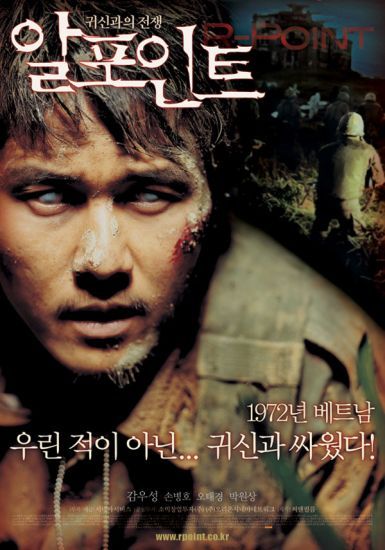 R-Point is a 2004 Korean horror film written and directed by Su-chang Kong and starring Gam Wu-seong and Son Byung-ho. It is set in 1972 Vietnam, during the Vietnam War. Instead of filming in Vietnam most of the movie was shot in Cambodia.

The film is set in 1972 during the Vietnam War. A group of South Korean soldiers from Battalion 53 fail to report back from a strategically important island 150 kilometers south of Saigon referred to as R-Point. The soldiers have been missing for 6 months and are presumed dead, until a shortwave radio transmission from R-Point is received from the missing soldiers. The transmission continues at irregular intervals over the next 3 months, repeating the same message - "Donkey 30, Long-horned Beetle do you copy? Donkey 30, Long-horned Beetle, do you copy? We are dying." This prompts HQ to dispatch a search-and-rescue party out to find the missing men, even though the sole survivor of the team insists that he saw all of them die and that he was the one who collected their dog-tags.

A renowned combat veteran, LT Choi Tae-in, is ordered by HQ to lead the mission as an act of redemption for his crime (visiting an illegal brothel, which led to the death of his platoonmate at the hands of a female Vietcong). He is given seven days to lead a team of nine soldiers to find the missing men. HQ then recruits members for the mission by giving promises of an early discharge from the Army and a journey home on a commercial airline upon success of the mission.

The men then set sail to the island referred to as R-Point from a dock and, upon arrival, took 2 photos of the expedition team. But, not long after proceeding into the jungle, they are ambushed by the Vietcong. They take cover and fire blindly, until LT Choi flanks the pillbox and disables it with a rocket launcher. When they investigate the pillbox, they find a female guerrilla next to the decomposing body of another VC. One of the soldiers searches her for intelligence items, looks at her bracelet with a cat bell tied to it and is tempted to take it. After being told that his fingers will rot off if he steals a dead person's belongings, he quickly relinquishes the idea. After arguing over who should finish the girl off, LT Choi eventually decides to leave her be and move on. After a while they come across a grassy field with two large stones at the entrance with carvings; the first stone saying "Hundreds of years ago the Chinese killed the Vietnamese and dumped their bodies in the lake, it has since been filled in and a temple erected in memory of the Vietnamese" and the second stone saying "Wherever you go, I'll be there. All those with blood on their hand will not". The last part is not legible as it was chipped off over time. Being soldiers, they shrug it off as a hoax and decide to think nothing more of it. That night after the men set up camp, Corporal Joh reveals he is a mortician's son and that the area the bodies are buried in is not a suitable place neither for the living nor the dead, adding that only ghosts are drawn to the area.

When they wake up the following morning, they find they had slept right in front of an abandoned French Plantation. They proceed to search the house, clear all the rooms and set up base. Sergeant Jung and Sergeant Mah find a small footlocker with maps left by the previous French garrison and a broken tape-player. After the briefing on the details of the mission, Sgt Mah realises that Sgt Oh was from Battalion 53 and would know how the missing men looked like. Sgt Oh denied this, after which LT Choi passes the order to search the surrounding area in two squads. When on the search, Cpl Joh misses the main group because he was relieving himself. He looks around in despair and shouts out to his comrades to no avail. Eventually, he found the group of soldiers at a field up ahead. He whispers to the men, furious at them not answering his calls. The men show no emotions and do not react to Cpl Joh, who notices the last man wrote "Jang Sook, wait for me" on his helmet. He looks back at the forest, and turns around to see the soldiers going prone in the tall grass. Instinctively he does the same, but is confused when no one stands back up at the lack of hostilities. He stands, but does not see anyone in the grass.