Once Upon A Time In Highschool 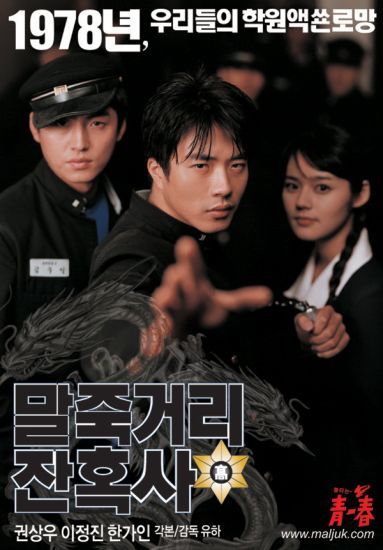 Spirit of Jeet Kune Do: Once Upon a Time in High School (Korean) is a 2004 South Korean drama film. The background of the film is set in a high school in South Korea, 1978. The original Korean title literally means "Cruel history of Maljuk street" where filming was located in the present neighborhood of Yangjae-dong, Seocho-gu district, Seoul.

Kwon, who starred as Hyun-soo, transfers to another school. He is sent to a bottom-rank class and experiences violence in classroom by a group of gangsters in his class, led by Jong-hun, who is a stereotypical Korean bully in school. The teachers are also depicted as authoritarian to the students, using violence for the sake of discipline, as did most Korean teachers in the '70s and to some extent in modern days as well.

Hyun-soo, after a failed relationship with Eunjoo (played by Han Ga In) , decides that he will no longer put up with the conduct of Jong-hun and his boys as well as the harsh and violent disciplinary techniques being put up by the teachers, and so starts to train himself in Jeet Kune Do, inspired by his greatest hero Bruce Lee. His father, a martial artist, frequently resorted to minor violence to discipline his son.

Hyun-soo challenges Jong-hun to a duel one day when he is no longer able to put up with his irrational behaviour. Jong-hun and his friends are grievously injured by Hyun-soo's nunchaku, sometimes referred to as nunchucks. Hyun-soo is expelled after this incident.

Hyun-soo meets his friend Hamburger again at the GED institute and they talk about their past. He meets Eunjoo again, but they say their goodbyes on a bus. Jackie Chan's 1978 movie Drunken Master is featured in the background at the end of the movie as Hamburger and Hyun-soo play a fighting game in front of the cinema complex.