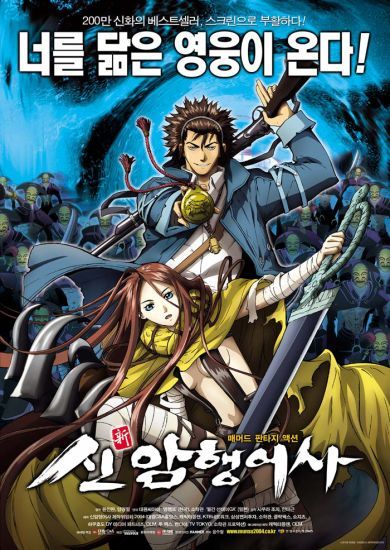 Blade of the Phantom Master (Shin Angyo- Onshi, Sinamhaengeosa), translated as "New Royal Secret Commissioner", is a serial manga-manhwa and animated film created by Youn In-wan and illustrated by Yang Kyung-il. The series takes place in a world reminiscent of ancient Korea, and follows the Korean-folktale-inspired adventures of Munsu, one of the few remaining guardians against corruption and tyranny, as he seeks to find those responsible for the destruction of his country. It was serialized from 2001 to 2007 in South Korea (as Sinamhaengeosa) and in Japan (as Shin Angyo- Onshi), and was adapted into an animated theatrical-release film in 2004 in a first-of-its-kind collaboration between Japan and South Korea. In 2007, an English-language version of the film was released in the United States by ADV Films under the title, Blade of the Phantom Master. In 2008, the anime became one of over 30 ADV titles transferred to Funimation. [6]