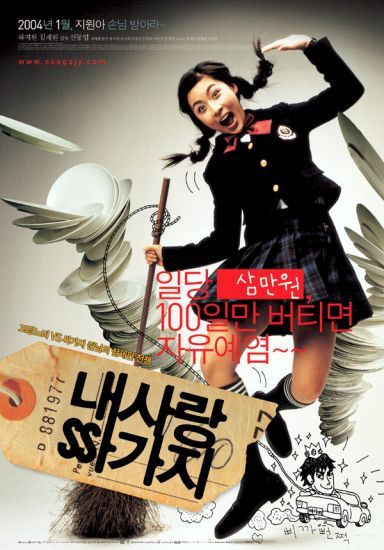 100 Days with Mr. Arrogant (aka My Love Sagaji) is a 2004 South Korean romantic comedy film.

After being dumped by her boyfriend just before their 100 day anniversary, Ha-Young (Ha Ji-Won) meets a college guy named Hyung-Joon when she accidentally kicks a can that hits him in the face and causes him to scratch his Lexus. He demands she pay him $3000 on the spot. She escapes from him, leaving her wallet behind.

Hyung-Joon stalks her, demanding money to pay for his car. Since she is a poor high school student Hyung-Joon writes up a "Enslavement Agreement" for Ha-Young in order to pay for the damage to his car. Ha-Young is thrown into a nightmarish slave life for 100 days, cleaning his house, running his errands, doing his homework and cleaning his car.

By accident she finds out that the damage to Hyung-Joon's car only costs $10! She then takes her revenge. However, before she knows it Hyung-Joon shows up at her house as her new tutor! He once again takes advantage of her, but soon Ha-Young finds herself falling head over heels for Hyung-Joon. But what happens when he drops out of her life just when she needs him most?