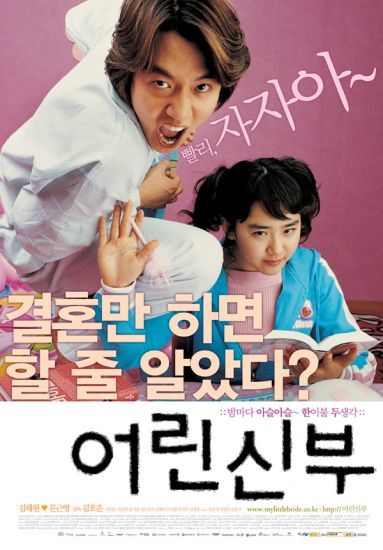 My Little Bride (eorin sinbu) is a Korean language romantic comedy film about an arranged marriage between a new teacher and a student. It was directed by Kim Ho Jun and was released in 2004. It was the second most popular Korean movie of 2004 in Korea, behind the blockbuster hit Taegukgi, with 3,149,500 visitors. It was 4th most popular among all films

Boeun (Moon Geun Young) is an ordinary high school girl who worries about grades and has a crush on her school's baseball team ace, Jungwoo. One day, Boeun's grandfather orders her to marry Sangmin (Kim Rae Won) because of a pact he made with Sangmin's grandfather during the Korean War. Despite the grandchildren's opposition, they are forced to marry because of Boeun's grandfather's strong influence. Boeun's undercover married life begins: She pretends that she doesn't have a husband and starts dating Jungwoo. Boeun believes that she can manage both men and live a double life. Everything goes smoothly until Sangmin visits Boeun's school as a student teacher.