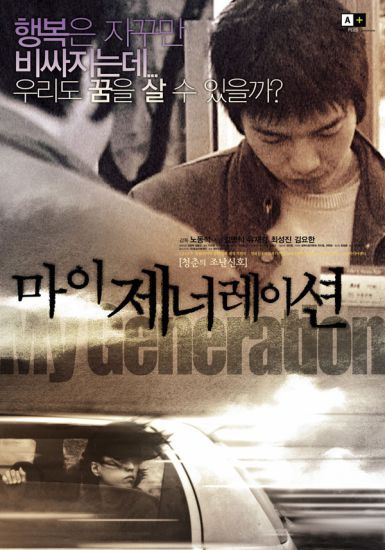 Perhaps director Noh Dong-seok felt liberated in making his DV-ed debut film My Generation, a black/white number with brief eruptions of color, but his characters are anything but free. Their lesser capital constrains them. As a result, they seem to simply float through their world despondent and anxious about how they will cover their debts rather than realizing any sense of agency.

Kim Byoung-seok and You Jae-kyoung (both played eponymously) are a couple. Noh chooses to present their intimacy as a casual one, occasionally playful, occasionally pathetic. The playfulness arises in little scenes such as Byoung-seok jokingly bumping Jae-kyoung along the hallway on route to a room of a love motel where some very different kinds of bumping will be going on. Or my favorite scene where Jae-kyoung waits in Byoung-seok's car. When he knocks on her window, he crouches and does a strange 360-degree turn, as if he's a mechanical toy or an amusement park ride. His mechanical-ness is enhanced by the sound of Jae-kyoung's drawing down of the car window. Jae-kyoung greets Byoung-seok by lunging towards him with a little-dog-like bark-bite, reminiscent of the reverse anthropomorphism we witnessed in Noh's short "Doggy." It's a simply strange, but wonderfully endearing, scene. Although the film doesn't survive as a completely satisfying whole, it's through little pieces like this that I am permitted pleasant memories of my My Generation viewing experience.