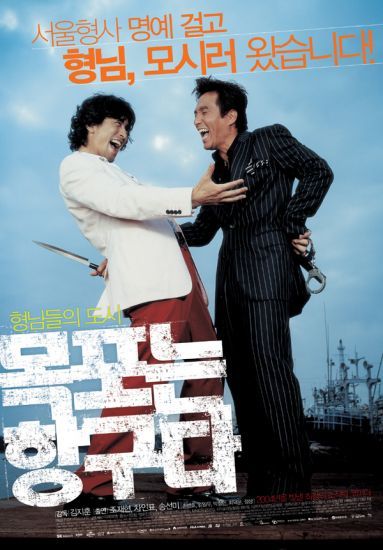 Mokpo stars Jay-hyeon Jo as Soo-cheol, a bumbling cop who gets beaten up on a regular basis. But because he's a lot smarter than all the other cops combined (not a hard thing to be, considering the intelligence of cops in these movies) Soo-cheol's incompetence is put up with. When prosecutor Im Ja-kyung (Seon-mi Song) arrives in Seoul with a plan to break up the Mokpo gangs, she somehow ends up with Soo-cheol as a volunteer for an undercover assignment.

In Mokpo, Soo-cheol encounters obstacles, mostly because he's an idiot playing a gangster, and this doesn't convince anyone, namely head hood Baek Sung-ki (In-Pyo Cha). But as dictated by the script, Soo-cheol eventually manages to worm himself into Sung-ki's confidence. Soon Soo-cheol is living the high life and risks forgetting that he's an undercover cop. Meanwhile, cinema aficionado Sung-ki is thinking of retiring, which doesn't sit well with his underlings.