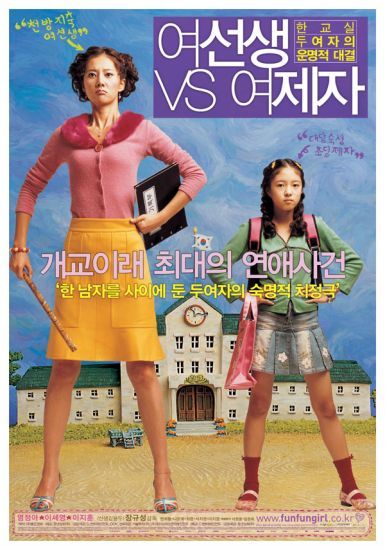 YEO Mi-oak is a hot-blooded aging single woman who works as a teacher at a primary school nestled in a small city by the sea. She's so sly even the principal can't control her. Behind her elegant appearance, she lives by the day hiding her immature, rash, and shameless personality. She lets her own mistakes slide but she will never forgive any of her students' wrongdoings.

On the first day of school, a bold transfer student named GOH Mi-nam is late to school, but surprisingly even later than Mi-oak. Using Mi-nam as an excuse, Mi-oak takes control of the class by punishing everyone. But Mi-nam, who's reached puberty much faster than her peers, combined with a sharp tongue that any teacher is afraid of, isn't easily manageable. Mi-oak sees that she's up for a big challenge.

Things turn for the worse in the new semester at this countryside school as all the girls instantly go crazy when a new handsome single teacher, KWON Sang-choon, arrives. Mi-oak, who've always waited for the chance to escape from the country life and work for a big school in Seoul, is also no exception. Mi-oak has fallen for Sang-choon and to win his heart she uses every trick in the bag. But she has an unexpected rival to compete against. She's the very girl who doesn't let anyone get in her away, especially teachers. It's Mi-nam. Now, a fierce rival between teacher and student unfolds and pushes the limit.