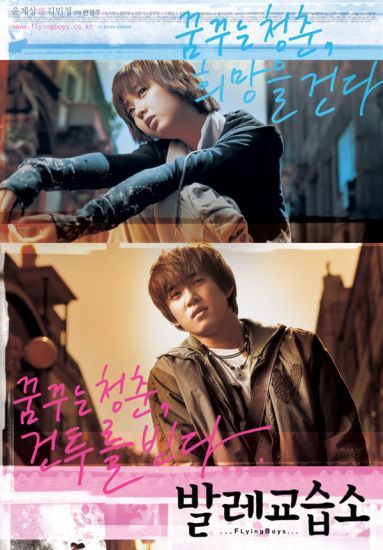 Flying Boys is a 2004 South Korean film, written and directed by Byeon Yeong-joo, and starring Yoon Kye-sang and Kim Min-jeong.

Min-jae is a high school senior who lives with his father, an airline pilot, and is struggling with his studies. For some time he has had a crush on Su-jin, a girl his own age who lives in the same apartment building, but has lacked the courage to approach her. Su-jin, meanwhile, is frustrated with her family life and keen to get away. She plans to become a veterinarian, even though she is no good with animals. Min-jae and Su-jin are unexpectedly thrown together when they are both pressured into joining a local ballet class. As time passess they get to know each other, as well as the other oddball characters who make up the rest of the class

Kang Min-jae, a senior at Taesung High School, lives with his stern father, who's a captain of a famous airline. He has liked a blunt and staunch girl named Hwangbo Soo-jin in the same apartment building but he never had the courage to go up and talk to her. Soo-jin lives in a family that puts the son on the pedestal, she has no room to escape the pettiest housework even while she's studying for the college entrance exam. After the exam, Min-jae has a drink with his buddies and then sneaks out with his dad's car.

On the way, he discovers a victim to a hit-and-run accident. Yang Jung-sook, a ballet instructor at the community center in the district, sees Min-jae and the body. Jung-sook, having difficulties in finding enough students for her class, threatens Min-jae, who she caught drinking and driving without a license, and drags him and his two friends to learn ballet. Meanwhile, Soo-jin's parents also forces Soo-jin to learn ballet to get rid of her stiff and boyish appearance. Finally, Soo-jin, Min-jae and his buddies, Dong-wan, and Chang-sub, meet at the ballet school at the Hwangkeum community center. With Yang Jung-sook at the center of the ballet school, various people from all walks of life learn ballet. While they all clash and open each other's hearts to one another, they finally come together in a memorable performance in the end.