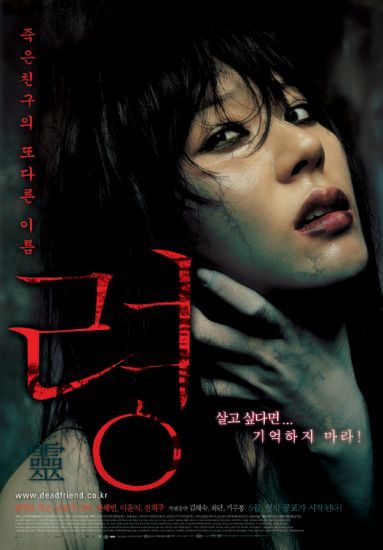 Dead Friend (Ryeong) is a 2004 South Korean horror film. It is one of a number of recent South Korean horror films set in a girls high school; the trend began with 1998's Whispering Corridors. It starred Kim Ha-neul as Min Ji-won, Nam Sang-mi as Su-in, Bin (Jeon Hye-bin) as Eun-seo, and Shin Yi as Shin Mi-kyung. Ryeong directly translates into "The Ghost". Both Kim Ha-neul and Nam Sang-mi previously starred together in Too Beautiful to Lie.

Three friends from the same high school are conducting a seance with a bunshinsaba - a traditional South Korean ouija board. As the spirits are called by Eun-jung (Lee Yun-ji), the planchette of the bunshinsaba starts jumping up and down: At the same time, her sister Eun-seo, who was sleeping in the next room, wakes up screaming. When Eun-seo comes out, she has an argument with Eun-jung about conducting the seance rather than studying. After she leaves, Eun-jung says she wishes the ghost had taken her sister away and then jumping to join her friends in bed jokingly tells them that if they don't send the ghost back it will kill them. They are all unaware of the planchette moving around the board in its own. Nor are they aware of Eun-seo being attacked by a ghostly water-based presence in the kitchen.

After a visit to her doctor, an amnesiac Min Ji-won (Kim Ha-neul) finds out that now her brain waves have stabilised, there's a good chance she may get her memory back. She's decided to leave college, leave her mother and go overseas, to make a new start for herself.

In time-honoured movie tradition, though, little snippets of her memory start to come back in her dreams - and they're almost always tainted by some frightening figure she can't place. Not only that, but they seem to be continually connected to water, whether in the dream itself or by the medium of a knocked-over glass of drinking water next to the bed. But soon enough, inexplicable things begin to happen to her in reality as well - echoes of her dreams, the ghosts of her forgotten past invading her waking life.

Just at this time, Ji-won gets a blast from the past: Yu-jung, an old friend from High School, comes to find her after she saw her in a dream - and not only that, one of the other girls, Eun-seo, has died after telling this girl she had seen something bizarre. It's not long before Yu-jung also has a terrifying supernatural experience with the ghost Eun-jung never sent back.

Now three of her closest friends from High School are dying under mysterious circumstances. But what is the identity of this ghost, how is it linked to her own forgotten past, and can Ji-won find out how to save herself?