Korean Movie
Dance With The Wind 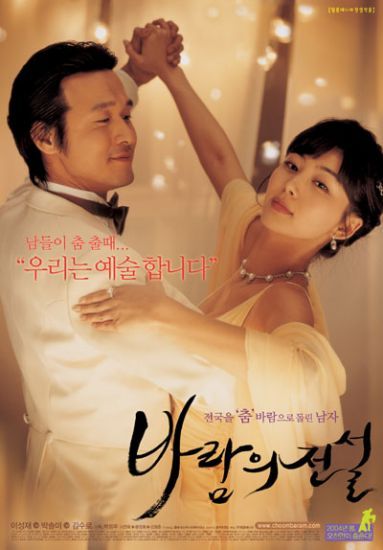 Dance with the Wind (Baramui jeonseol) is a 2004 South Korean film starring Lee Seong-jae and Park Sol-mi, and is the directorial debut of Park Jeong-woo. The story is adapted from a 1999 book by novelist Ji Seong-sa.

A handsome and attractive young man manages to kick start an unprecedented boom in ballroom dancing in the country. No one knows his exact identity, but we at least understand one thing: that his dance is a type of art in itself. A self-asserted true artist Park Pungsik (played by Lee Seongjae) appears as a lady-killer and teacher of ballroom dance. Formerly an ordinary sales person, Pungsik one day happens to meet his high school classmate Mansu (Kim Suro) who has trained in ballroom dance. From that time on, Pungsik is deeply absorbed in the art of dance and decides to go on a long journey across the nation to find real dance masters.

After spending five years of learning from them the real essence of dance art, he returns a true master of dance and lures scores of women by teaching them dance. Finally, Pungsik meets a female detective Song Yeonhwa (played by Park Solmi). Though she is dispatched to arrest him, she later ends up helping him. Actor Lee Seongjae utterly transforms himself from a cold-blooded murderer in 'Public Enemy' into a mellifluous, charming guy in this movie. The screenplay is based on the short story 'A Writer' written by Seong Seokje.