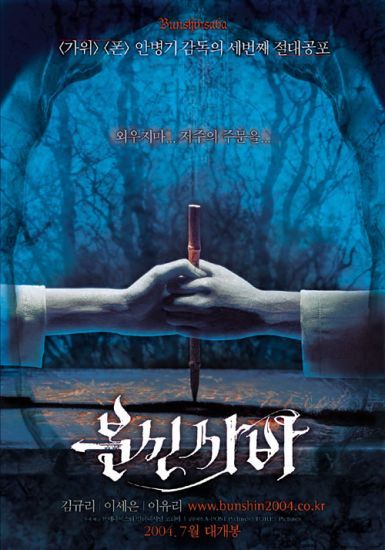 Bunshinsaba is 2004 South Korean horror film directed by Ahn Byeong-ki. In 2004 it screened at the 8th annual Puchon International Fantastic Film Festival. The film had its American premiere at the 2005 New York Korean Film Festival and was shown later that year at the 5th annual Screamfest Horror Film Festival.

The story is about Yoo-Jin, a transferee from Seoul who, with her two other friends, are constantly being bullied by their classmates. One night, Yoo-Jin and her friends decide to place a curse on their enemies by creating a Ouija board and start to write the names of the four female bullies. Using the Bunshinsaba curse, Yoo-Jin warns the others not to open their eyes until the spell is finished. The calling takes effect, and Yoo-jin, somewhat curious, opens her eyes. To her shock and horror, she sees an image of a girl with long hair beside her.

However, that does not stop there. The three girls soon find out that one of the bullies mysteriously died with a burnt face. Meanwhile, the school employs a volunteer teacher named Eun Ju Lee, simply known as Ms. Lee, as an art teacher. She starts to call the roll in her class and stumbles on seat number 29 as she mentions the name Kim In-Sook. The students are terrified when they hear the name, and rush out of the classroom as they see her talking to Kim In-Sook. The only one left is Yoo-Jin, who tells Eun Ju that Kim In-Sook doesn't exist. Eun Ju takes another look at the seat and realizes that there's no name at seat number 29. Suddenly, Yoo-Jin sees a figure on Eun Ju's back.

Investigations soon rise as other three bullies die in the same manner. Finally, Yoo-Jin realizes that the spirit Kim In-Sook is possessing her. She killed all of those bullies, even though she doesn't remember doing it.

Eun Ju also senses a terrible force surrounding Yoo-Jin as she also starts to feel an unearthly presence within her. Mr. Han, Yoo-Jin's class adviser, decides to help Yoo-Jin by consulting his friend on what causes her to act strangely. Through hypnotism, they are able to see the past and find out that the spirit possessing Yoo-Jin is that of Kim In-Sook, and have a vision how she was killed. Things get worse when Eun Ju becomes possessed by Kim In-Sook's mother, Chun Hee, who was in fact a reincarnation. Chun Hee and Kim In-Sook were brutally killed by the villagers and before dying, placed a curse that for generations to come, whoever left the village would die. With Chun Hee finally taking possession of Eun Ju's body, she exacts punishment on the people who wronged them, slaying the school's principal but sparing Mr. Han's life. Not long after, Eun Ju gives birth to a girl and within that girl's body is the spirit of Kim In-Sook.