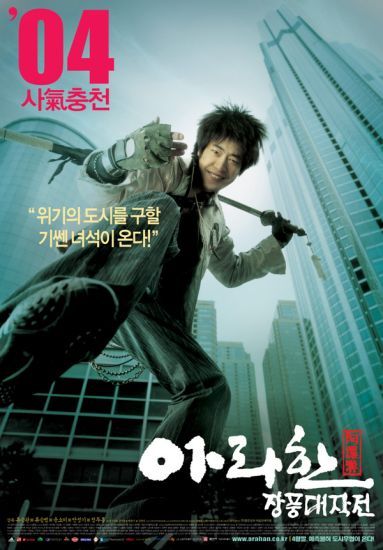 Arahan (Arahan jangpung daejakjeon) is a 2004 South Korean film. The film was the third feature film directed by Ryu Seung-wan and stars the director's brother Ryu Seung-beom along with Yoon So-Yi. The film was a relative commercial success, selling over 2 million tickets domestically, but wasn't as liked by critics as Ryu Seung-wan's previous films

When a thief driving a motorcycle steals a purse of a pedestrian, the clumsy, naive and honest rookie policeman Sang-hwan runs after him, but the skilled specialist in martial arts Eui-jin captures the criminal and Sang-hwan is severely injured.

She brings Sang-hwan to her home, where the six Masters of Tao heal him and believe that he has a powerful Qi, the spiritual energy of the universe, and could be a powerful warrior. Sang-hwan begins his training to ascend to a Maruchi, while the evil and ambitious Heuk-woon is accidentally released from his imprisonment. The powerful Heuk-woon attacks the masters, searching for a key that they protect, which would permit him to become an Arahan and dominate the world. When the masters are defeated, Sang-hwan and Eui-jin are the only and last hope to mankind