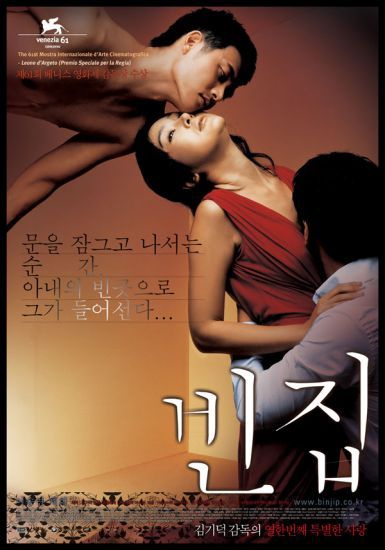 3-Iron (original Korean title: Bin-jip, meaning Empty Houses) is a 2004 Korean film directed by Kim Ki-duk. The plot revolves around the relationship between a young drifter and a battered housewife. The film is notable for the lack of dialogue between its two main characters

The film stars Jae Hee as Tae-suk, a loner who drives around on his motorbike delivering takeout menus, which he tapes over peoples' front-door keyholes. He later returns to break into the apartments that haven't removed the menus, presuming them to be empty. He lives in each flat while the owners are away, even washing their clothes and mending broken appliances for them. When he breaks into a large home, he is unaware that he is being watched by battered housewife Sun-hwa (played by Lee Seung-yeon). Tae-suk leaves after he makes eye contact with Sun-wha but returns after silently contemplating on the roadside. He witnesses Sunwha's husband abusing her and proceeds to catch his attention by practicing golf in the yard. He hits Sunwha's husband with golf balls and Tae-suk and Sunwha leave together. The couple begin a silent relationship, and the two begin moving from one flat to another. At one home they are caught sleeping in bed after drinking alcohol, wearing the pajamas of the apartment's residen

The most remarkable thing in this movie is the strange kind of relationship that develops between a woman and a stranger. Their love has no words. But the silence itself narrates the past of the woman, and the depth of their understanding. In the midst of breaking into houses, the couple get in trouble with the law. They break into a home only to discover an elderly man, with a circle of blood around his head. They clean his body and wrap it in cloth. The man's son and daughter-in-law arrive at the apartment and assume that the two have killed the man. They are interrogated at the police station but steadfastly remain silent. Sun-hwa's husband arrives and takes her back home. It is found out that the elderly man died of lung cancer. Sun-hwa's husband bribes the policeman in charge of the investigation to allow him to hit Tae-suk with golf balls, after Sun-hwa refuses his advances. Tae-suk ends up trying to choke the police officer and is taken to jail. He continues to "golf" with an imaginary club and ball. He angers his prison guard by constantly hiding in his cell. The third time Tae-suk is actually following the guard behind him in the "180 degrees" that the eyes cannot see. He continues to practice some sort of mysterious dance having to do with the art of movement and of invisibility. After being released from prison, invisible to her husband's eyes, Tae-suk rejoins Sun-hwa in her house. Sun-hwa appears to say,"I love you," to her husband, but the audience can see that she reaches out for Tae-suk.