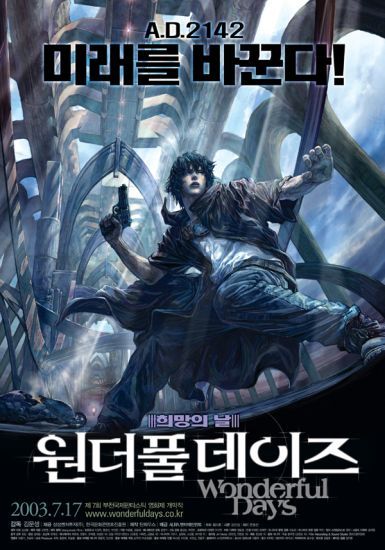 Wonderful Days (AKA Sky Blue) is a South Korean animated science fiction film, released in 2003, written and directed by Kim Moon-saeng. It features backdrops rendered using photo-realistic computer-generated imagery, comparable to those in the film Final Fantasy: The Spirits Within, along with the use of highly detailed models for some of the backdrops into which the cel animated characters were then animated. However, convincing CGI animation of humans (especially human movement) was not attempted. The backgrounds in the film were shot with traditional motion control techniques, then processed to look like CG. The vehicles were all rendered, and the characters were cel animated.

The film has been released in numerous Western countries such as the U.S. and Great Britain under the title Sky Blue. These versions have been slightly edited, with the loss of two minutes' running time compared to an original Korean cut. Other Western countries such as France and Finland have kept its original titlewhich is a Hangul transliteration of the English phrase "Wonderful Days" (it would be rendered in Revised Romanization as "Wondeopul Deijeu"). The film was scheduled for release in the US on Blu-ray disc on June 28, 2008. As that date neared, it was re-scheduled for June 23, 2009, however the financial situation of Palisades Tartan in America has thrown a US domestic release into doubt.

Set in a post-apocalyptic world in the far future, Wonderful Days tells the story of the efforts by a segregated ethnic group known as Diggers to destroy the polluting city of Ecoban. The Diggers are lead in this mission by an enigmatic young man known as Shua (Marc Worden), whose presence after a 10 year absence from the city lands him back into a love triangle with his childhood friend, Jay (Cathy Cavadani), and her boss, the security commander for Ecoban, Cade (Kirk Thornton). The movie ultimately deals with themes on modern issues such as environmental destruction, pollution and class struggle, the latter of which echoes the 1927 silent science-fiction film Metropolis.