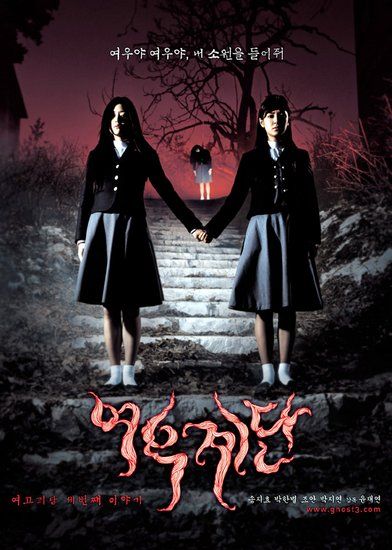 Wishing Stairs (Yeogo goedam 3: Yeowoo gyedan) is a 2003 South Korean K-Horror film. It is the third in a series of South Korean horror films set in girls high schools that began with 1998's Whispering Corridors, but, as with all movies in the series so far, is unrelated to the others; apart from a song being sung in one scene that is a pivitol plot in Voice.

The legend goes that if you climb the twenty eight steps leading up to the school dormitory, counting each step aloud, and find a twenty ninth, a spirit will appear and grant you a wish. The movie takes place in a girl's art school and focuses on two friends studying ballet, however their friendship soon turns sour when they find themselves competing for a single spot in a Russian ballet school. Yun Jin-seong played by Sung Ji Hyo, remembering the old legend of the "Wishing Stairs" wishes for a place in the prestigious arts school, and in a shocking turn of events, she gets it, at the cost of her best friend, Kim So-hee's life. However, it's only when the extremely odd character of Eom Hye-ju wishes the dead girl back, that an unspeakable evil is released.

The film itself seems to mirror the ballet "Giselle", which girls in the film are studying, as well as drawing upon the classic short story "The Monkey's Paw". So-hie as Giselle, and Jin-sung as Albrecht. Unhappy with always having to play the "prince" to So-hee's princess, Jin-sung betrays So-hee, which in turn leads to So-hee being crippled and commits suicide after her friend Jin-sung confesses she has hated her all along. When So-hee's spirit is wished back, Jin-sung is haunted by So-hee's ghost, the love she once felt for her friend warped by Jin-sung's hurtful actions.

As in the prior two movies, this film has strong indications of friendship, betrayal, and the taboo of lesbian affairs in an all-girls school.