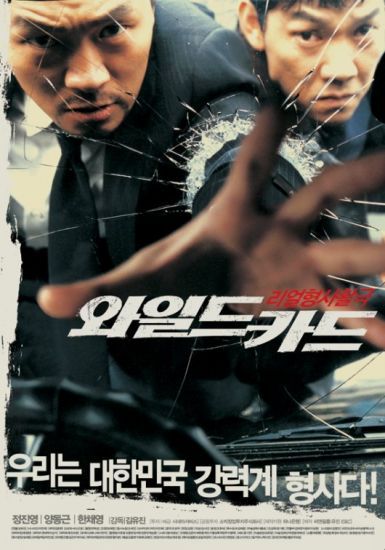 If you are with a wild card in a game, you are blessed with a 100% winning rate by this almighty card. But life is never an easy game to play. It is life-and-death to the two desperate detectives played by Yang Dong-geun ("Bet on My Disco")and Jung Jin-young ("Hi Dharma")to obtain such a winning chip in this action-packed Korean movie "Wild Card" directed by Kim Yu-min in 2003. Oh Yoong-dal (Jung Jin-young) and Bang Jae-soo (Yang Dong-geun), working as a team, are assigned to a case late at night when a body of a middle-aged woman has been found robbed and dead in a subway station.

After days and nights of investigation, the entire Crimes and Violence Department is still all in a jumble but another case of the same nature comes up again as a hard blow to the whole team. Running out of options, these two police officers decide to turn to the wild card- Do Sang-chun (Ki Joo-bong) the gangster leader- in order to get the four brutal criminals arrested.