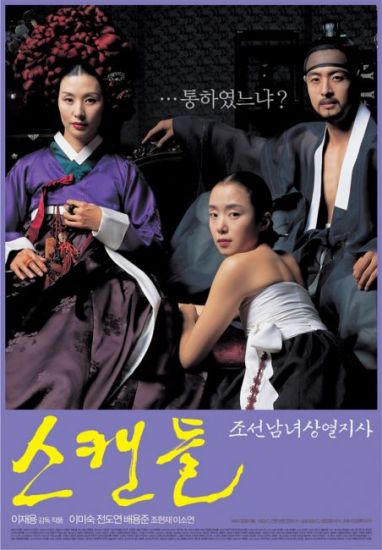 Untold Scandal, originally titled Joseon namnyeo sangyeoljisa, is an award-winning South Korean film released in 2003. Adapted from the novel Les Liaisons dangereuses, which takes place in late 18th century France, the film is set in the late 18th century Korea, towards the late Joseon dynasty, which in itself distinguishes it notably from previous film adaptations.

Chosun's most infamous Casanova, irresistible temptress and virtuous widow entangled in provocative and dangerous liaisons. The end of the Chosun dynasty-a period when rigid Confucianism clashed with encroaching new beliefs. Lady Cho is a brilliant woman who mastered the classics on her own, and she resents the limited life she must lead as a woman. A devoted wife on the surface, she secretly entertains herself with sexual conquests.

On the other hand, her younger cousin Jo-won is accomplished both as a scholar and in martial arts, but rejects a high government post as if he disdains the hierarchical and patriarchal conventions of the time. He indulges in the pleasures of the flesh with as many women as he can seduce. Lady Cho was his first love, and they become co-conspirators in a high-stakes game of love and intrigue while hiding their true feelings for each other.

One day, Lady Cho asks Jo-won to deflower the innocent young Soh-ok, who is to become her husband's concubine, but his attentions are elsewhere: Lady Sook. Graceful and aloof, Lady Sook lives according to her convictions as a Catholic. Jo-won becomes obsessed with seducing her, a woman who has remained chaste for nine years since her husband's death. However, it proves to be more difficult than he expected when Chosun's greatest playboy sets out to conquer the most virtuous woman in the land.