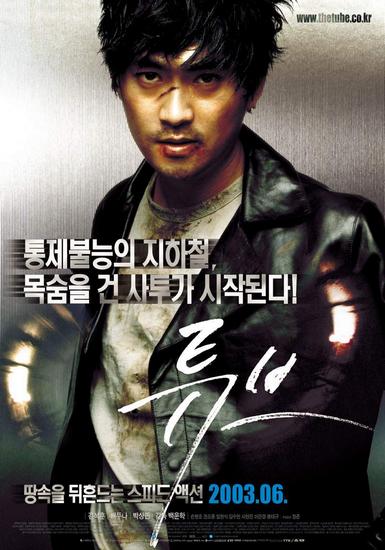 Tube is a 2003 South Korean action thriller film directed by Baek Woon-hak. The film stars Kim Seok-hun, Bae Du-na, and Park Sang-min. The film features police officer Jay (Kim Seok-hun) who is a subway police officer who spends his days reminiscing over his lost lover. The pickpocket Kay (Bae Du-na) becomes infatuated with Jay and tips him off about the government assassin Bishop (Park Sang-min) hijacking a subway car. Both Jay and Kay find themselves in the target car when the Bishop makes his move.

Do-jun used to be a top agent for a high-level politician. But in the course of saving him from terrorists, Do-jun loses his beloved, and what is worse, discovers that his employer is at the center of a corrupt power circle. Do-jun still bears a grudge against Ki-taek, whose crime claimed his colleagues' lives and ruined his reputation. Filled with remorse and hatred, Do-jun is now spending his days in the subway police squad. One day Ki-taek kills the mayor of Seoul and hijacks a subway train. He is out for revenge on the hypocritical and corrupt men that once were his bosses. The train, full of passengers taken hostage, runs totally out of control and the situation runs amok.