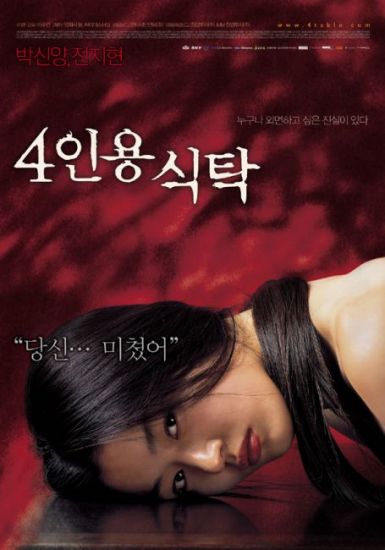 Jung-Won, an interior decorator, is overcome with inexplicable anxiety as his long-overdue wedding with Hee-Eun approaches. One evening, Jung-Won falls asleep on the subway on his way home. He is barely able to wake up at the last station. As he comes round he sees two young girls asleep on the seat next to him. He can't wake them before he has to jump off as train leaves the station. He arrives home to find that his wife-to-be has bought them a new metal dinning table.

The next day, Jung-Won is working when he hears on the radio that two young girls were found poisoned on the subway. In the course of fitting some lights in a ceiling he is hit by falling debris and cuts his forehead. After a trip to the hospital for some stitches, he goes home to find the two dead girls sat at his new dinning table.

Jung-Won, who is now working on renovating a psychiatrist's office, bumps into Yun, a patient on her way out of a therapy session. She has been receiving treatment after her friend, Jung-Sook, killed both of their children a year earlier. Another accident leads to Jung-Won taking Yun back to his apartment where she too sees the apparition of the dead children.

Having been tormented by nightmares and the hallucinations, Jung-Won is desperate to find out something about the apparitions that haunt him. Yun runs away refusing to help him, so he searches through the patients' records at the clinic to find out more about her. Using the information he succeeds in persuading her to help him and she tells him things about events in his past he had tried to forget.

Unfortunately, he suffers the consequences rediscovering his past. His fiance Hee-Eun suspects that he is having an affair and leaves him. Jung-Sook is convicted of the murder of Yun's child, but she suddenly commits suicide as she is leaving the courthouse. Shocked, Yun calls Jung-Won who comes over to console her. He talks to her husband, Moon-Sub, who suspects that it was his wife, not her dead friend, who killed their children.

Jung-Won, caught up in his desire to deny his past and his fear of Yun, turns down Yun's cry for help when her husband tries to have her committed to a mental hospital. His refusal crushes Yun who throws herself off Jung-Won's apartment building. Jung-Won sees her as she falls. In the final scene Jung-Won's sits in his dust covered apartment. Face lined like an old man, he brings a steaming dish of food to the dining table and sits down.

His dining table is full, not with the family he had been planning but the apparitions of the two poisoned girls on the subway and Yun.