The Scent of Love 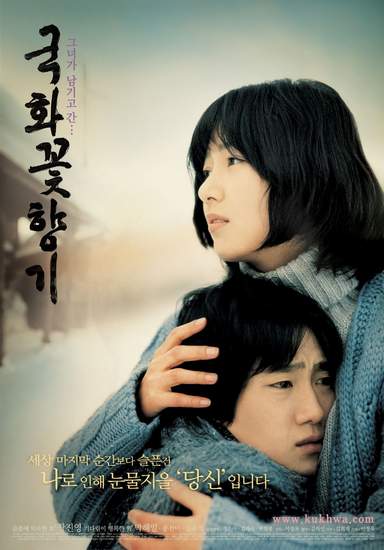 Scent of Love (aka Scent of Chrysanthemums) is a 2003 South Korean film, and the directorial debut of Lee Jeong-wook. The film is based on a novel of the same name by Kim Ha-in, and stars Jang Jin-young and Park Hae-il in the lead roles.

University student Seo In-ha meets a young woman on the subway and instantly falls in love. After joining a local book club, he is pleasantly surprised to find that the woman, Mun Hie-jae, is also a member. Although he makes a poor first impression, In-ha and Hie-jae eventually become friends, though he is left disappointed when she later rejects him, as she is more interested in another student, Kang Seong-ho.

Several years pass, with In-ha and Hie-jae going their separate ways. While Hie-jae and Seong-ho prepare to get married, In-ha, now a producer at a local radio station, still pines after his first love. When Hie-jae survives a car crash that kills her fiancé and parents, In-ha keeps a respectful distance. After a while he resumes his pursuit of her by reading out letters on his radio show, and finally winning her heart the couple get married.

However, their happiness is short-lived, as Hie-jae becomes pregnant only to discover that she has stomach cancer, and must choose between her own life and the life of her unborn child.