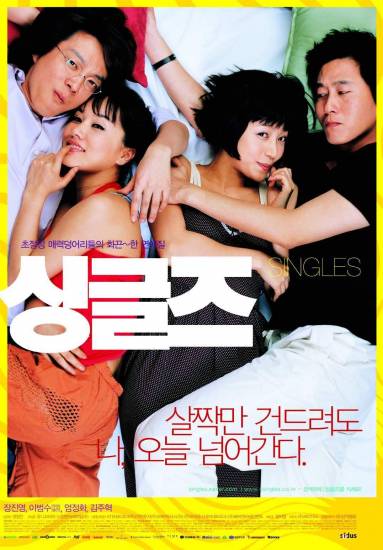 Singles is a 2003 romantic comedy film from South Korea, starring Jang Jin-young, Uhm Jung-hwa and Lee Beom-soo, and based on the novel Christmas at Twenty-Nine by Japanese writer Kamato Toshio. Jang won "Best Actress" for her performance as Na-nan at the 2003 Blue Dragon Film Awards.

Na-nan, soon to turn 30, is at a crossroads in her life. She has been dumped by her boyfriend, then gets demoted at work from designer to restaurant manager. For support she relies on her best friend, promiscuous party girl Dong-mi, who shares an apartment with the shy and studious Jeong-joon. Eventually Na-nan attracts the attention of Su-heon, and the two start dating. But when she learns that Su-heon is being transferred to the United States, she must choose between making a go of her career as a restaurateur, or starting a new life overseas.