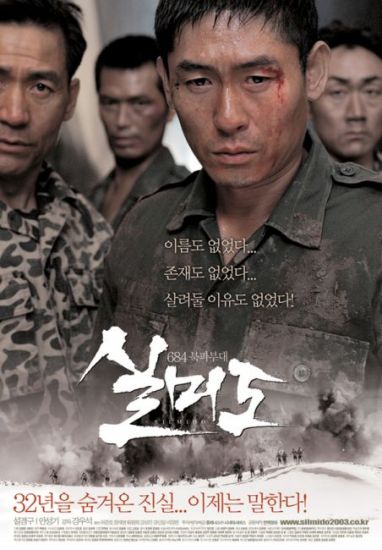 Silmido is a 2003 South Korean film, directed by Kang Woo-suk. It is loosely based on a military uprising from the island of Silmido in the 1970s. At the end of its run, the film was the most watched film ever in South Korea, and the first film to attract an audience of 10 million viewers in the country. Taegukgi later broke its record in 2004, and then The King and the Clown with additional 2 million in 2006.

As a means of retaliation, the South Korean military assembled a team of 31 social outcasts and death/life criminals, training them on the island of Silmido, off the coast of Incheon, in order to execute Kim Il-sung. The mission, regarded a suicide mission, was seen as the only way for these new recruits to redeem themselves and show their loyalty to their country. If they succeeded, they would win their freedom and a new life. With this goal in mind, they endured gruelling, almost inhumane training, becoming finely honed killing machines.

In October 1968, at the end of their training, they were dispatched on their mission to the North, but were recalled not long after their departure due to mysterious orders from above. The project was called off, and they returned to Silmido discouraged and frustrated. This frustration led two squad members to go AWOL and rape a female doctor who lived relatively nearby; they were discovered, surrounded by military, and realizing their fate, attempted mutual suicide. One man was killed in this, the other injured. The latter was then returned to the camp on Silmido and strung up, alive, as an example while his fellow squad members were beaten by the troops for the two men's betrayal. One member snapped, charged to the front and killed the strung-up man. Meanwhile efforts continued to negotiate peaceful reunification between the two Koreas, rendering the squad all but useless.

To keep the top-secret, dirty project unknown to the outside world, the South Korean intelligence agency decided to "eliminate" the squad. The commander, outraged, was then told that if his troops failed to follow this order, they too would be killed. Torn between his duty to follow orders and his personal honor, the commander intentionally leaked this information. As one high-level officer was sent away from the island for his unwillingness to participate (lied into thinking he's going to re-negotiate the murder order), the squad realizing they were going to be killed that same night, made plans to fight back. They killed their trainers and, then after being told the truth of the mission - that they legally no longer exist, and thus would neither receive recognition for their mission if it succeeded, nor even be allowed to return to society - decided to escape from the island and make their story known. On 23 August 1971, the 20 remaining members of the squad captured a bus and commandeered it for Seoul. An official pronouncement was made through the media that 20 "armed communist agents" had infiltrated the country, and a state of emergency was declared. Eventually they were stopped by army roadblocks and fired on. Realizing their plight, the men engaged in mutual suicide, all throwing their hand grenades into the middle of the bus. The aforementioned high-level officer learned what was happening and tried to call back the army, but he failed. Later, an investigation was carried out. The resulting report was filed away, unread.