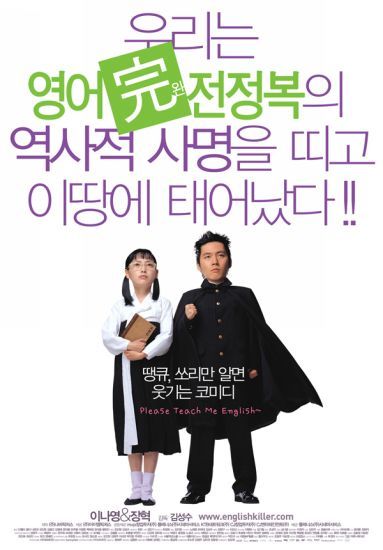 Please Teach Me English (Korean:Yeongeo wanjeonjeongbok) is a 2003 South Korean comedy about a young woman who begins English lessons after she is unable to help a belligerent foreigner who comes to her government office.

This story is about relations between Mun-su (starring Jang Hyuk) and Na Young-ju (starring Lee Na-young), both of whom are classmates in a private English class. Mun-su, having a taste of girls, would frequently look out for girls working in his shoe retail shop. However, Young-ju, who had an interest in Mun-su, frequently looked for him. Mun-su said she was normal. They eventually became friends, and would frequently sit together in English classes.

One day, Young-ju boasted about a pig in her grandparents' farm who had the ability to recognize the English alphabet. The curious class decided to take a trip to the countryside and look for the pig, only to discover that the pig had been eaten up earlier on the same day (it was just a convenient excuse for Young-ju, as there was in reality no such intelligent pig). Young-ju used a little piglet and trained it to recognize the English alphabets, of which her efforts was discovered by Mun-su, who stepped in to help. However, the pig ran off after they successfully managed to achieve their goal, and had to run into the farms to recapture the pig. The entire expedition, along with Young-ju's family had a party that night before returning.

During the return journey on the bus, Young-ju overheard Mun-su sharing a photograph of a woman with his partner, which she mistook as Mun-su's girlfriend. As she listened, Mun-su boasted that the woman in the photograph was more beautiful than the person herself in real life.

A depressed Young-ju skipped classes, and her English teacher had to look for her before the second last day of class, prompting her to return to class. When Young-ju refused, the teacher knocked on her head, and both parties had to turn up in class the following day with a plaster on their heads. The day after, Young-ju, following a farewell lunch party in a Korean restaurant with the class, (of which Mun-su did not turn up, claiming that he had some personal matters to attend to), happened to meet Mun-su's mom as she entered a hotel, looking for Mun-su. Her mum took Young-ju to be a public relations officer, and Young-ju discovered that Mun-su's mum was meeting the girl she had seen in the photograph.

The girl, known as Victoria or Moon-young, spoke no Korean and needed Young-ju to translate. As Mun-su's mum, wearing a hanbok, expressed her grief, regret and joys to Victoria, Young-ju, who had only just learned simple English, was at a loss and uttered out that "she looked more beautiful in the photo than she was in real life". Victoria looked astonished, hardly believing her ears. As her mother walked away, weeping, telling Young-ju that she will be going to the restroom for a while, Young-ju told Victoria that everybody hated her because she is not Korean. Victoria responded to Young-ju and told her to tell them that she came with good intentions and left.

Mun-su's mum was astonished when she returned to the empty table. Mun-su arrived at this point of time, seeing his mother weeping. A guilty Young-ju went into hiding, seeing everything. They checked the counter, and found out that Victoria had just checked out of the hotel. Victoria gave one last glance at her family, before leaving for the car. Young-ju stopped her car, and told Victoria that everybody was waiting for her, and that she was actually lying.

Victoria went back in, and hugged Mun-su and his mother. Young-ju slipped away and boarded a train, with Mun-su leaving his newfound family and trailing behind Young-ju. He boarded the same train, and confessed that Victoria is not his girlfriend, but his long-lost sister from New York. Mun-su found Young-ju and helped her to put on her shoes. Following which, they kissed each other, and the entire expedition on the train cheered for them. The couple married later and had a baby.