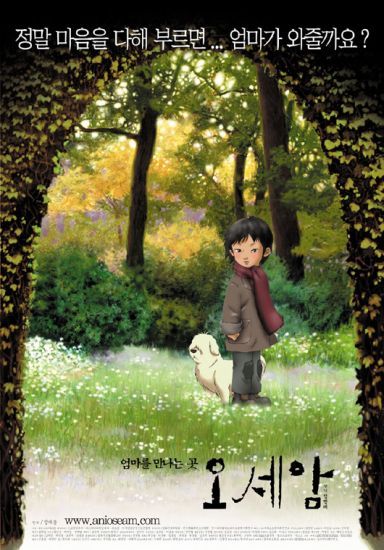 Oseam (Hangul) is a 2003 South Korean drama/religious animation directed by Sung Baek-yeop. It is based on a novel by Korean author Jeong Chae-bong, who has described it as being a fairy tale for adults. The title means Five years.

Oseam follows two orphans, Ga-mi and her younger brother Gil-son. Ga-mi is a gentle and reserved blind girl, while Gil-son is hyperactive and often gets into mischief. The two seek refuge at a Mahayana Buddhist temple, helping with the chores, as they cope with the loss of their mother and home several years ago due to a fire accident, which is also where Ga-mi lost her sight. Gil-son, too young to understand, still believes they will find their mother someday as Ga-mi has never told him she died in the fire. Soon later Gil-Son accompanies a monk to go meditate in the mountains and find a cure for his sister's blindness, but ends up sacrificing his life for Ga-mi's sight.

The movie is very slowly paced, often quite slice-of-life in its approach, though dotted with moments of flashback and briefly intense scenes. A lot of emphasis is placed on the characters, particularly the orphans.