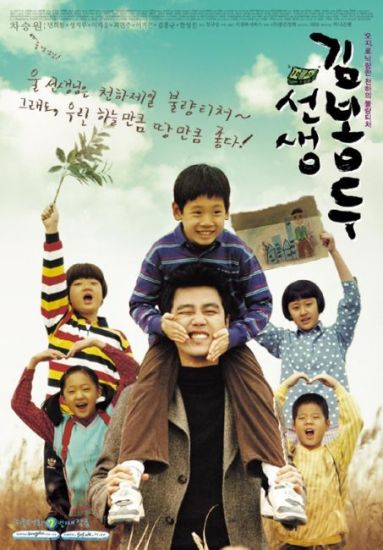 Kim Bong-doo, a 'popular' elementary school teacher in Seoul, is a problem teacher who comes late to school more than the students, and is scolded by the principal every day. He likes drinking better than preparing his courses, and he actively encourages and coaxes parents to offer money in exchange for his favoring their children. But one day, he finally gets caught in his own act, and gets transferred to a school in the boondocks.

Kim Bong-doo gets driven away to a school in the countryside, where cell phones are useless and even buying cigarettes at the nearest corner store is out of the question. There are only five students in the whole school, and he's also discontent with the extremely naive villagers who offer him all sorts of vegetables and fruits instead of money.

Independent-study in 1st period, art in 2nd period, P.E. in 3rd period. Mr. Kim idles his time waiting for the day to return to Seoul as quickly as possible. To make matters worse, a grumpy old man named Mr.Choi begs him to teach him the Korean alphabet, which makes Mr. Kim's life in the country even gloomier.

Mr. Kim, who waits for the chance to return to Seoul, maps out a plan to transfer all of his students to Seoul and to close the school down. For starters, Mr. Kim begins an after-school program to focus on developing each student's special talents so that they'll want to get a better education in Seoul. Contrary to his bad intentions, the villagers and school officials reconsider their policy of closing down the school because of Mr. Kim's wonderful devotion to the kids.

But when there's a will there's a way for Kim Bong-doo. A businessman unexpectedly shows up and says he'd like to turn the school into a survival game site, and because of him, Mr. Kim tastes the power of money again, which he had forgotten for a while. Will the senseless and good-for-nothing teacher Mr. Kim Bong-doo ever succeed in going back to Seoul?