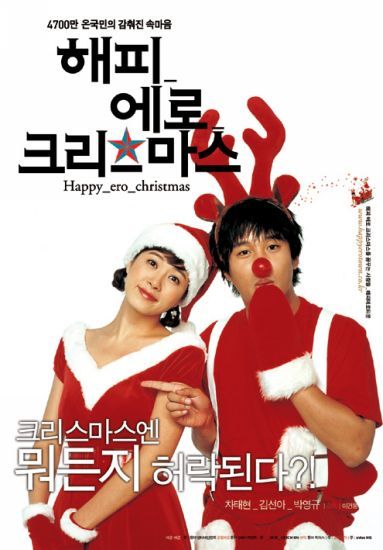 Happy Ero Christmas (Haepi ero keurisemaseu) is a 2003 South Korean romantic comedy film that offers non-stop laughter in the run-up to Christmas. This film stars Korean comedy superstar Cha Tae Hyun (My Sassy Girl) who once again shows off his extraordinary comedic charisma in "Happy Ero Christmas" and Kim Sun Ah (The Greatest Expectation and Wet Dreams). Yearning to be a respectful cop to vanquish the evil since small, Byung-ki (Cha Tae-hyun) is a patrolman of few words in a village, helping out trivial tasks like distributing promotional papers. One day, he runs into Min-kyong (Kim Sun Ah), an employee of the neighborhood bowling alley, and falls for her at first sight. His attempts to woo her, however, are hardly noticeable and even seem to be gloomy as the boss of the local gang Sang-doo, who also swoons over Min-kyong, strikes to get her virginity on Christmas Eve! Watch for the goofy tricks of the two to compete for Min-kyong and finally come to blows!