Too Young To Die 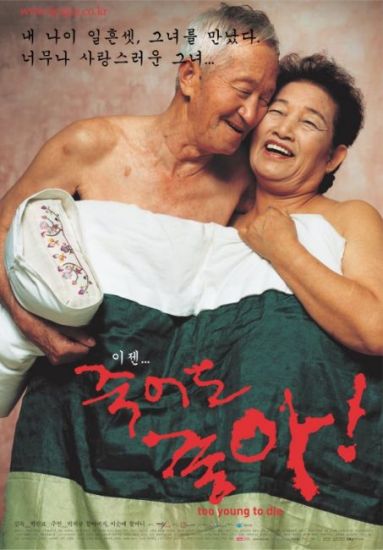 It sounds like the perfect Hollywood love story. Park Chi-Gyu and Lee Soon-Ye meet cute, they flirt, they start dating, move in together, bicker, go to karaoke, and have sex (lots and lots of sex) just like new couples everywhere. But add in the fact that our lovers are in their mid-70's and you've suddenly got a movie no studio exec would touch with a ten foot pole.

A digital video molotov cocktail, TOO YOUNG TOO DIE stars Park and Lee who play themselves in this movie based on the ups and downs of their real life relationship. An older couple who fell in love late in life, these two are not the gimpy seniors we're used to seeing onscreen. These two fight, flirt, and fuck with an earthy vigor that's inspiring for anyone who's scared of getting old.

Despite being invited to Cannes and the Venice Film Festival, Korean censors feared this healthy depiction of sex between consenting adults would warp morals and gave the movie a "Restricted" rating which meant it could only be screened in special "adults only" theaters, none of which currently exist. After a long battle, it was finally, grudgingly released and its untraditional, sexy charm spurts off the screen like the fountain of youth. Refusing to trivialize sex and love among the senior set, this is a movie that eschews narrative convention in order to shout out a love song from the top of the world. Not so much a traditional movie as a celebration of love. which turns out to be a more vital force than any of us could have imagined -- TOO YOUNG TO DIE is a flipped bird to a world that thinks people over 65 should crawl off in a corner and die.