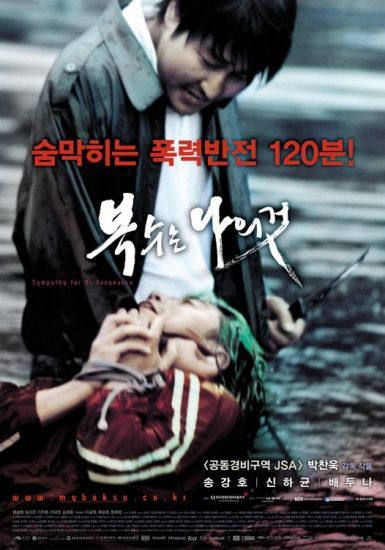 Sympathy for Mr. Vengeance is a 2002 South Korean film directed by Park Chan-wook which follows the character Ryu trying to earn enough money for his sister's kidney transplant and the path of vengeance that follows. It is the first part of The Vengeance Trilogy and is succeeded by Oldboy (2003) and Sympathy for Lady Vengeance (2005). The original Korean title means "Vengeance is Mine" or "Revenge is Mine".

Ryu, a deaf-mute, works in a factory to support his ailing sister who is in desperate need of a kidney transplant. Ryu tries to donate one of his kidneys to his sister, but is told that as his blood type doesn't match that of his sister, he is not a suitable donor. After being laid off from his job by the factory boss, Ryu contacts a black market organ dealer who agrees to sell him a kidney suitable for his sister in exchange for 10,000,000 Korean won (approximately $10,000), plus one of Ryu's own kidneys. He takes the severance pay from his factory job and offers the money to the organ dealers, who take the money and one of his kidneys, but then disappear completely. Three weeks later, Ryu learns from his doctor that a kidney has been found for his sister and that the operation will cost 10,000,000 won, but since the organ dealers stole his money, he won't be able to pay for it.

In need of money for the operation (and in retaliation for his being fired), Ryu and his friend Yeong-mi, a radical leftist, conspire to kidnap the daughter of the boss who fired him. Instead they both realize that the kidnapping would immediately put them under police suspicion, and decide to kidnap Yu-sun, the daughter of the boss's friend, Dong-jin, another factory CEO. The girl stays with Ryu's sister, who takes care of her while the distraught Dong-jin arranges for a ransom. After Ryu collects the money and returns home, he learns that his sister has discovered his scheme and unwilling to be involved or burden Ryu further, has killed herself. Ryu takes Yu-sun and his sister's body into the countryside to bury her by a riverbed. While Ryu mourns, Yu-sun slips into the river and drowns.

Hours later, as Dong-jin mourns his daughter and swears revenge at the river bank, Ryu ambushes and murders the organ dealers. Dong-jin, having investigated the identities of the kidnappers, finds Yeong-mi and begins interrogating her. Yeong-mi apologizes for Yu-sun's death but warns him of her membership in a terrorist organization which, knowing Dong-jin's identity, will kill him if she dies. Dong-jin, unfazed by the threats, tortures her to death. Ryu returns to Yeong-mi's apartment building and discovers the police removing her body on a stretcher. Ryu, consumed with grief, swears vengeance on Dong-jin.

Ryu arrives at Dong-jin's residence in an attempt to kill him. However, Dong-jin had previously set up an electronic booby trap on his doornob, and when Ryu touches it, he is hit by a powerful electric shock which knocks him unconscious. Dong-jin then binds Ryu and returns him to the riverbed where Yu-sun died. After binding Ryu's hands, an emotional Dong-jin acknowledges that Ryu is a good man but that he has no choice, and slashes Ryu's achilles tendons, forcing him beneath the water, where he drowns. Dong-jin drags Ryu back to shore, and then drives off to a desolate location to bury the body. Once there he begins to dig a hole, but soon men arrive. They surround and stab Dong-jin to death, finally attaching a note to his chest identifying themselves as the terrorist group of which Yeong-mi was part. The group leaves Dong-jin dying beside his car with the bloody tools and bags he used to chop up, dismember, and package Ryu's body.