Resurrection of the Little Match Girl 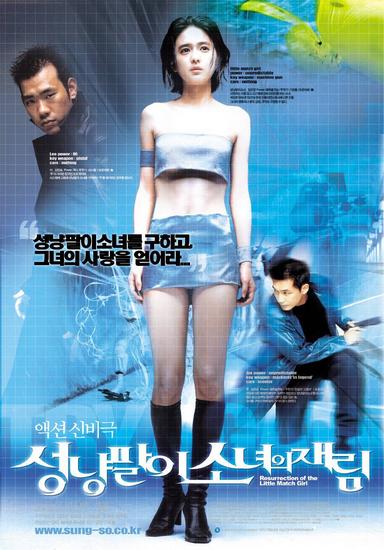 A matchstick girl who was frozen after death 200 years ago (for failing to sell any matchsticks), becomes reborn in this movie which pays homage to computer games. Working at a Chinese restaurant, Ju (played by Kim Hyeonseong) is a game maniac who suffers from unrequited love with Hui-mi (Im Eungkyeong), who works part-time at a game room next door. One day, he meets a little matchstick girl of the same countenance as Hui-mi, and buys from her a gas lighter where he finds a phone number.

When he calls the number, he comes upon the question: "Will you please log in the game 'Resurrection of the Little Match Girl?" From that time on, Ju enters into the world of virtual reality with a view to save the girl and win her love, which is by no means an easy job. He has to fight against gangsters, secret agents, and commandos, sometimes with the help of a lesbian warrior named Lara (modeled after Lara Croft in "Tomb Raider".

His final destination is the heart of the central computer operation system which gets rid of anyone who attains access to it. Indefatigable, Ju finally encounters an Orwellian "Big Brother" type boss who controls the whole computer system. The Matrix-like movie adroitly mixes the state-of-the-art techno game with Buddhist references, by sometimes presenting portions of Buddhist texts and mantra-like music.