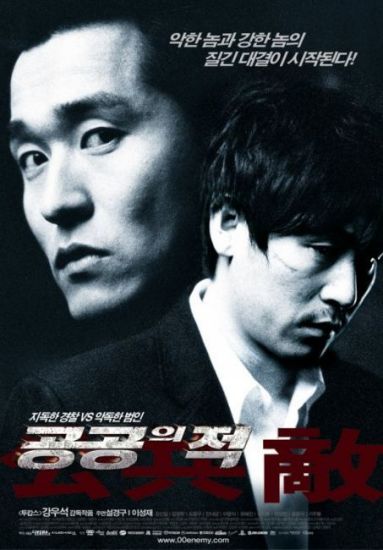 Public Enemy is a 2002 South Korean film directed by Kang Woo-suk. The film was well-received by audiences and critics alike, being seen by almost 3 million people in South Korea, while winning Sol Kyung-gu "Best Actor" at the 39th Grand Bell Awards for his lead role. The success of the film led to the making of the sequel Another Public Enemy in 2005.

The film's plot pits a tough loose-cannon cop, Kang Chul-jung, and a psychopathic killer, Cho Kyu-hwan, against each other. Kang typifies the anti-hero cop genre, taking bribes and stealing drugs from criminals. His career is in a slump and internal affairs are investigating his actions. The antagonist Cho, on the other hand, leads a life as a successful business and family man. Under his cool exterior however, he displays a total disregard for others, killing people for the slightest perceived misdeed.

The two main characters first meet by chance in a dark alley shortly after Cho brutally murders his parents for monetary reasons. Cho first asked then started begging to get his parents to leave their will to him. After his parents reject, Cho gets a butter knife and stabs them both around the abdomen. He sprays flour all around their body and washes the excess blood by taking a shower. Then he starts walking to get rid of the murder weapon. Kang is out taking a crap in the dark alley during an unrelated stakeout and runs into Cho, who ends up slashing Kang in the face with a knife.

Kang later joins the investigation into the murders, but doesn't recognize Cho as he didn't get a good look at his face. His instincts tell him that something is wrong about Cho, and Kang starts stalking him. Kang soon convinces himself that Cho is the murderer, although no one else believes that he has a case.

Eventually, Kang discovers a crucial piece of evidence, a broken fingernail, at the murder scene and confronts Cho with it. This leads to the two facing off against each other in a fight, which ends with Kang beating Cho to death.