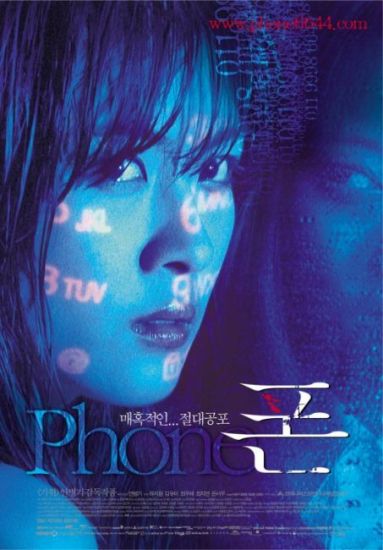 Phone (Pon) is a 2002 South Korean horror film directed by Ahn Byeong-ki and starring Ha Ji-Won and Kim Yu-Mi. The film is a complex and disturbing love story that involves possession and ghosts.

A young, frightened woman runs into an elevator. Her cell phone rings, the elevator stops, and the lights flicker. She screams to be left alone, and claws at the walls. A young journalist, Ji-won has exposed an underage sex scandal. Her editor Ho-jeong warns her to keep a low profile until the men implicated can be tried. In this vein, the journalist purchases a cell phone with an unregistered phone number, and accepts an offer by the editor and her sister's husband Chang-hoon to move into their unused new house in order to keep a low profile for a few days. Ji-won begins to receive mysterious and disturbing phone calls. One of these calls is answered by the editor's daughter, Yeong-ju, who begins to act strangely afterwards and seems to develop an Electra complex.

The journalist examines the call records and by chance discovers that those who previously had her number have all died under mysterious circumstances (the girl in the elevator from the opening scene was one of these previous owners). Throughout her investigations, a female ghost keeps reappearing and making her presence known in other ways such as playing the piano, in particular the song Moonlight Sonata by Beethoven. We also learn that Chang-hoon and Ho-jeong only managed to have their daughter through artificial insemination, the eggs having been donated by Ji-won. The mysterious phone calls to Ji-won continue; she can decipher that they are from a female voice who is screeching about a man with whom she is very angry, but she does not know who or why.

Ji-won learns that the first number holder was a high school girl Jin-hie who went mysteriously missing. By talking to her friends, Ji-won finds out that this girl was madly in love with a man, whom she refused to name to her friends. One of her friends answered a phone call from Jin-hie and suddenly the light in the class room was flickering and all the students panicked. The girl begged the caller to stop and finally stabbed herself with her mechanical pencil in her eyes and ears. All the while, Yeong-ju becomes more aggressive toward her mother and makes romantic advances toward her father. Ji-won discovers that was Jin-hie was having an affair with Chang-hoon (whose favourite piece of music is Moonlight Sonata) through Jin-hie's diary and inside the diary, a pregnancy test kit showing a positive pregnancy was found.

One day, Yeong Ju woke up from her sleep and grabbed a knife from the kitchen while Ho-jeong was sleeping on the sofa. Ho-Jeong only woke up after hearing a loud thunder crash and found out that the family picture was stabbed by the knife and Yeong-ju went missing. Later we find out that Yeong-ju actually went to Ji-won's place. When Ho-jeong went to pick up Yeong-ju from Ji-won's place, Yeong-ju locked herself upstairs shouting "Which one of you two will die for me?" Yeong-ju herself fell from the stairs and smiled at them while her blood flooded the floor and the door unlocked by itself.

Ji-won went back to herself to find that her laptop showing the same number again (Jin-hie's number) and her cell phone was ringing. She answered her phone and screamed while holding her ears. She tried to pluck off the power cable of her laptop from the socket only to find out that behind the socket was connected to a bundle of hairs. She pulled the hair and the wall starts to crumble and the body behind the wall was uncovered. Ji-won uncovered the face of the body and was shocked to find that it was Jin-hie's. She stepped back and bumped into Chang-hoon who seemed shocked as well.

Chang-hoon left the room. When Ji-won tried to catch up with him he discovered that he was already lying unconscious on the floor. She bent down to check him but was electric-shocked by Ho-jeong. When Ji-won wakes up, she was tied on a wooden chair and Ho-jeon was sitting behind her. We see a flashback on how Ho-jeong found out about her husband scandal. After she found the cell phone that Jin-hie gave him, she lured Jin-hie to the park at night and brought her to her house while her husband went on a business trip. There, Ho-jeong asked Jin-hie to abort her pregnancy but Jin-hie refused and insulted Ho-jeong about her infertility. Jin-hie then boasted about their sexual relationship. Ho-Jeong knelt down and begged Jin-hie to leave her husband but Jin-hie yelled at her saying that Ho-jeong was only dreaming. Jin-hie picked up her phone to call Chang-hoon but Ho-jeong spanked her and the phone fell.

Jin-hie becomes angry and attempts to strangle Ho-jeong, but Ho-jeong manages to push her away, down the stairs. Still alive, Jin-hie clutches her phone and falls unconscious. Ho-jeong covers Jin-hie's body with a large polythene sheet. Jin-hie's cell phone rings, and Ho-jeong tries to pick up the phone, but is surprised when Jin-hie suddenly stands up and walks towards her. Cornered, Ho-jeong picks up a small statue and hits Jin-hie in the head. Ho-jeong tries to take the phone away from the now dead Jin-hie, but she holds it tightly, probably due to cadaveric spasm.

Back in the present, in the same location,during the final confrontation, Ho-jeong told Ji-won about her jealousy toward fertile women and told her to keep her mouth shut. Ho-jeong then gave Ji-won an electric shock that caused her to be unconscious. Chang-hoon is lying in a bathtub filled with water with a piece of broken mirror stabbed on a deep cut on his wrist. From the reflection of the broken mirror, we saw Ho-jeong who then went to get accelerant. She went back to the room where Ji-won was and poured the accelerant on Ji-won and Jin-hie. she was preparing to torch Ji-won and Jin-hie's corpse but the lighter kept on blowing off. When she managed to keep the lighter lighted up, Jin-hie's body started to move within the walls. Ho-jeong was shocked and fell on the floor while Ji-won gained her consciousness and tried to break free.

In the morning Ji-won woke up and her hand was freed. She saw Ho-jeong lying dead behind the curtain but Jin-hie's body remained planted on the wall. Ji-won throws the troublesome mobile phone off a cliff. As the phone enters the water it begins to ring.