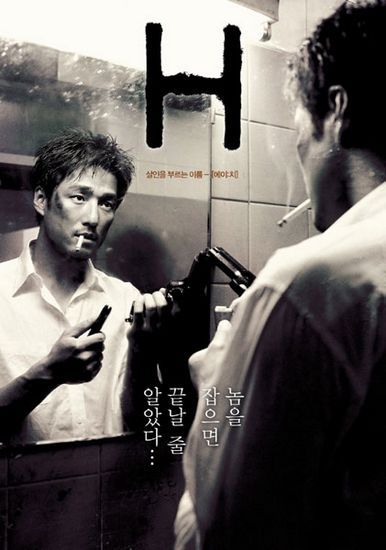 H is a 2002 South Korean thriller. It was written and directed by Lee Jong-hyuk, and stars Yeom Jeong-ah, Ji Jin-hee, and Jo Seung-woo. The story follows a serial killer who preyed on pregnant women has been behind bars for 10 months when a copycat killer becomes active. Detectives meet with the imprisoned killer and search for clues in an effort to head off the copy cat killer before he finishes.

They track down the killer by following clues from the first two victims: A pregnant schoolgirl whose fetus the killer removed, and a single mother strangled from behind on a bus. They had tried to pump Shin for information, but without success. They stake out the killer's home, but when the killer comes home, he notices the cops and runs. Kang follows him into a nightclub, where the killer slices off a lesbian's ear and then slits her throat, just like Shin's third victim. Kang fires four rounds into his chest; this puts him in a coma. Despite this, the murders still continue. The police capture the next suspect, but the murders keep occurring.

In the end, it is revealed that Shin's mother had tried to abort him, but he survived. The psychologist Dr. Chu had used post-hypnotic suggestion on the other two killers to make them commit copycat murders. Kang then kills Chu (imitating Shin's murder of an abortion doctor), but Kang is triggered by a CD mailed to him. Kang kills his own mother, who was a prostitute.

In the course of the movie, Shin is executed and his final words are "I killed my mother." This explains the sixth and last unidentified victim, whom he brought in a bag to the police station when he confessed. Kang is about to commit suicide when Kim shows up and kills him instead. Just before the ending credits, the letter "H" appears and expands into the word "hypnosis", and its definition.