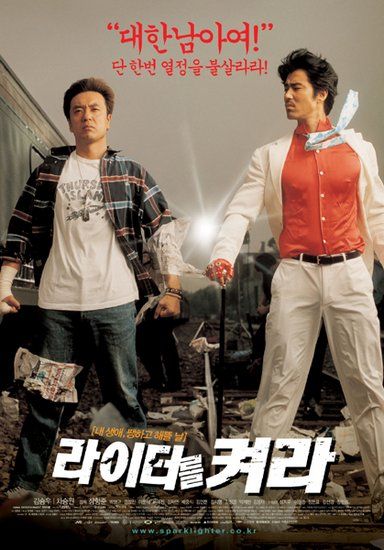 Break Out (Hangul,RR: Laiteoreul Kyeora), also known as Spark the Lighter, is a 2002 South Korean film.

A loser, Bongu (Kim Seung-woo), attends a high school reunion, where he is ridiculed for his lack of accomplishments. The next day he goes to the country for army reserve training, where he encounters further humiliation and failure. With his last few won he purchases a cheap cigarette lighter. With no other way home, he shares a taxi to Seoul train station with a fellow reservist and malcontent named Bum-soo (Kang Sung-jin).

While at the station, Bongu leaves his lighter in a bathroom stall, where it is purloined by a gangster, Yang Chul-gon (Cha Seung-won). Enraged beyond endurance, Bongu demands the lighter back, provoking a beating from the gangster's underlings. Undeterred, he follows Chul-gon onto a train. There, Chul Gon has more important business to attend to, waylaying a Senator (Park Yeong-gyu) whom he had helped into office but who has since refused to reciprocate with any political favors. When the Senator stubbornly refuses to concede, Chul-gon takes the entire train hostage. Meanwhile, Bongu will stop at nothing to recover his lighter.