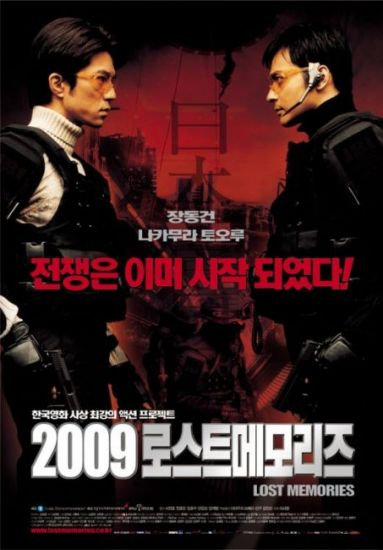 2009 Lost Memories is a 2002 South Korean science fiction action thriller film, directed by Lee Si-myung. It was distributed by CJ Entertainment, and was released on February 1, 2002. Japanese filmmaker Sho-hei Imamura plays the role of a historian in the film.

In an alternative future where the Korean peninsula is still a part of the Japanese empire, Sakamoto, a Japanese Bureau of Investigation (JBI) agent of Korean heritage and Saigo, his Japanese partner, try to solve a strange case where Pro-Korean nationalist "terrorists" attempt to steal a strange archaeological artifact. Initially Sakamoto is valuable to the case because of his ability to communicate with the terrorists.

He is later removed from the case when it is discovered that his father had some previous involvement with the terrorist group. Sakamoto's desire to solve the mystery involves threatening the powerful Inoue Foundation. This only makes him more passionate about its resolution and after uncovering more on his own, he discovers that reality isn't how it should be. It then becomes his new mission to restore history to its rightful path.