Take Care of My Cat 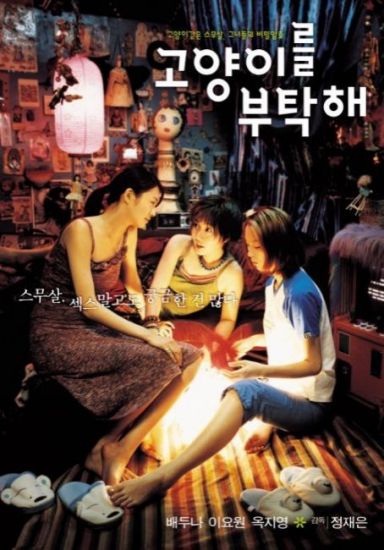 Take Care of My Cat (Goyangireul Butakhae) is a 2001 South Korean coming of age film. The movie chronicles the lives of a group of friends  five young women  a year after they graduate from high school, showing the heartbreaking changes and inspiring difficulties they face in both their friendships and the working world.

Though critically acclaimed in its native South Korea, the film's box office returns were not so great, prompting a 'Save the Cat' movement involving film-industry professionals to try to increase viewership before its theatrical run would be cut short. The film went on to many international film festivals as well, where it received awards and special mentions.

The film is the debut work of director Jeong Jae-eun, who would later go on to direct the 2005 film The Aggressives. The narrative of the 3 characters (when you consider the twins to be minor to the story) relates some important themes of modernity and how it is localized to the city of Incheon. The twins are of Chinese descent, revealed when they drop off a regard gift to their grandparents, who speak Chinese and are understood by the twins. We do not know if the twins themselves can speak or even read Chinese.

This underlies that Incheon once had a sizable Chinese community. The director alludes to this through hints--one of the girl's father has an insatiable appetite for Chinese dumplings, one of the girls models a Chinese traditional red dress that fits her perfectly.

Ironically it it the poorest member of the group of girls who is the real native to Korea. The story shows how alien Seoul is this group of young women and in a way show how alienated and alone the acutal Korean girl is in this group of women who have already instinctively embraced the underlying impluses of city life and their surrounding ethos.

The young girl with cat is scholarly, artistic and filial (though she chides her grandparents she takes great care of them through her actions). Her character being that representitive of what many Koreans would see as native to the Han spirit. Yet her virtues mean little in the face of modern culture and times. In a way, she is part of the old world Korea--where old Shamanistic Confucian values have little impact on today's success.