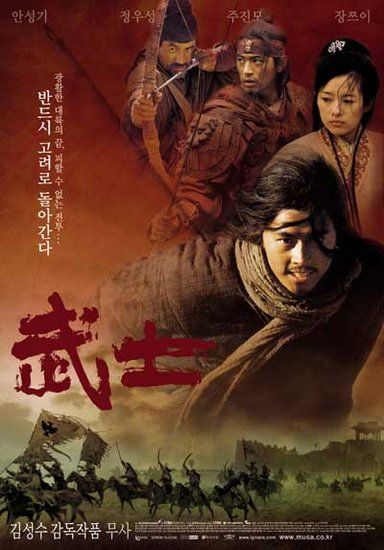 Musa (hanja, hangul), released as The Warrior in English-speaking countries, is a 2001 South Korean epic film directed by Kim Seong-soo, starring Jung Woo-sung, Ahn Sung-ki, Ju Jin-mo and Chinese actress Zhang Ziyi. The semi-historical story follows the adventures of a Korean peace delegation as they try to get back to Korea through the inhospitable deserts of northern China.

The film is regarded as being one of the biggest motion pictures in the history of Korean cinema. At the time of its production its budget was the largest ever for a Korean film. It features a high degree of historical accuracy in period costumery, props, settings, and most uniquely, language; that is, everyone speaks in their native tongues or through an interpreter conversant in a lingua franca.

In the 14th century, a failed Korean political envoy attempts to rescue a Ming princess from Mongols in an effort to save Korea's relationship with China.

In 1375, a small political envoy travels to China to meet the Ming Emperor. Mistaken for spies, the envoy is arrested. Their prisoner transport is attacked by Mongol marauders, who kill the Chinese guards and allow the Koreans to live. All the Korean ambassadors have died, leaving the inexperienced general to take charge. The soldiers arm themselves and quickly discover that the Mongols have kidnapped the Ming Emperor's daughter. They ambush the Mongols and rescue the princess. Yeo-sol, the former slave of an ambassador, defeats the injured Mongolian general Rambulwha in single combat, but allows him to live and escape.

The Koreans flee with the Princess, determined to return her safely to the Ming Emperor to atone for their diplomatic failure. The Mongols pursue, hoping to recover the Princess and marry her to the Yuan Emperor so that he may legitimize his claim over all China. Koreans head for a seaside fortress that the Princess tells them about, where they expect to find safe haven. Along the way, the Koreans pick up a group of Chinese peasants who are also fleeing from the Mongols.

Fighting their way through Mongol search parties, the group experiences many internal conflicts stemming from social class, love, and honor. The lower-class soldiers chafe under their poor treatment in comparison to the soldiers of the upper-class. They have little confidence in their young general, and prefer taking orders from their veteran sergeant, Jin-lip. The Princess has difficulty adjusting to the rough necessities of her position on the run. The General and Yeo-sol become nemeses, competing for the affections of the Princess and exchanging blows on several occasions.

The group reaches the fortress, only to find it an abandoned ruin. As the group prepare to mount a last stand, the Princess attempts to give herself up to the Mongols. Yeo-sol and the General recover her, and Yeo-sol is captured. Rambulwha offers a place in his army for Yeo-sol, but as the Mongols mount an offensive, Yeo-sol returns to the Koreans. In the final battle, the Koreans' gunpowder defenses backfire. Yeo-sol sacrifices his life to save the Princess, while the General dies fighting the Mongol general, who is also killed. All the Mongols perish, while all the Koreans are killed save Jin-lip. The Princess stays with the peasants at the fortress and promises to tell her father of the Koreans' sacrifice. Jin-lip builds a boat and sails back to Korea.