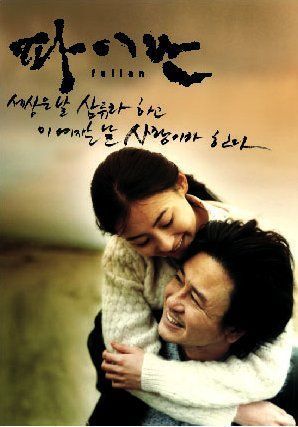 Failan (Hangul, RR: Pairan) is a 2001 South Korean film written and directed by Song Hae-seong. The film was adapted from a Japanese novel by Jiro Asada. It stars Choi Min-sik and Hong Kong actress Cecilia Cheung.

Failan, a Chinese woman of Korean descent comes to Korea after the death of her parents in search of her remaining family. Finding they have immigrated to Canada, she arranges a fake marriage to obtain a work permit in order to stay in the country. Though tricked and pressured toward working as a prostitute, Failan escapes this situation to work for an old woman at a laundromat.

Meanwhile, her legal husband, a low-level gangster, deals with his own troubles. He dreams of returning to his hometown, but his situation seems to be hopeless as he feuds with other gangland associates and drinks excessively.

One day he receives a letter from his wife, whom he has never met which reinspires him to make changes in his life. Tragedy reaches both characters, however, as Failan becomes fatally ill and her husband finds he doesn't have the power to extricate himself from his own personal pitfalls.