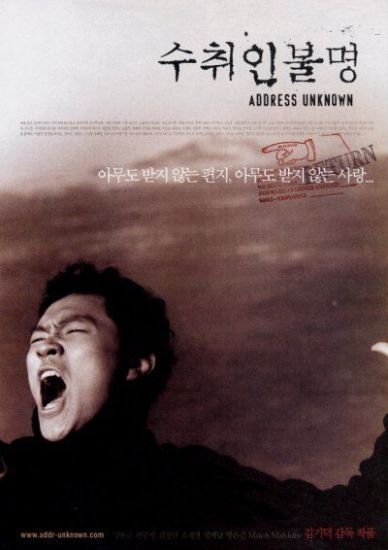 Address Unknown (Hangul, RR: Suchwiin bulmyeong) is a 2001 South Korean film directed by Kim Ki-duk. It was the opening movie of the 2001 Venice Film Festival.

Based on real life stories from the director's life, and those known to him. It is set in the Korean countryside around a U.S. army base, and particularly involves the villages that are affected by its presence. This includes an unstable, near psychotic American soldier who survives on a diet of LSD and rage, Eun-Ok, a girl with one defective eye, Jihum a lonesome boy and Chang-Guk, who lives in an old U.S. army bus with his mother. She has taught Chang-Guk English in an attempt to prepare him for their new life in America, reunited with his father who she mails regularly, although the letters are always returned "address unknown."

These are only some of the tragic stories told in this place, a seeming bath of misery, where life seems to revolve around beating dogs, drinking, sexual misadventure, and violence (in that order). The film opens by ominously telling us that no animals were harmed in the making of the movie. The viewer however, may feel as if they are being hit with a blunt instrument.